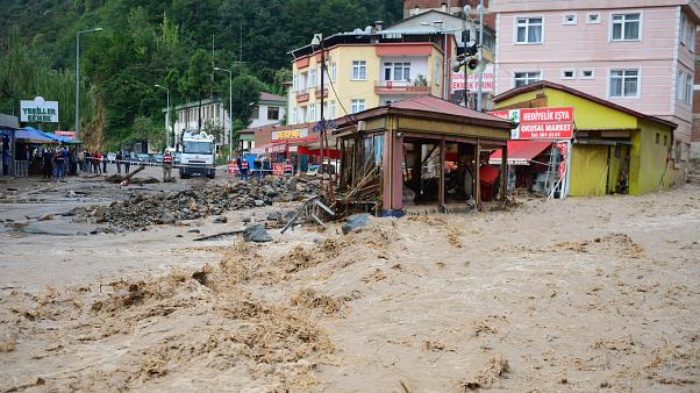 At least eight other people were reported missing, The Associated Press reported.

Helicopters hovered above the town of Dereli and the surrounding region in support of the search-and-rescue mission, which was launched after flooding caused by heavy rain washed away roads and buildings late Saturday.

Interior Minister Süleyman Soylu, who traveled to the region to oversee the rescue operation, said two bodies were recovered Monday. The private DHA new agency said one of the victims was a police officer who was riding inside a vehicle that was swept away by floodwater and fell into a ravine while heading to the disaster area.

Two other police officers who were in the vehicle already had been confirmed dead. Two more officers and the operator of a piece of excavation equipment are among the missing.

Excavators were seen Monday clearing mud and debris in Dereli, which lies 12 miles (20 kilometers) inland from the Black Sea in Giresun province.

Television footage on Sunday showed vehicles and debris being swept away by the flood waters in the town. Across the province, at least 17 buildings were destroyed and more than 360 were damaged, officials said.

Bekir Pakdemirli, Turkey’s agriculture and forestry minister, said the amount of rainfall over the weekend was higher than the region’s total monthly average for August.

At this time of year the Black Sea region’s population typically swells with seasonal workers who travel to harvest tea and hazelnuts and live in flimsy camps.