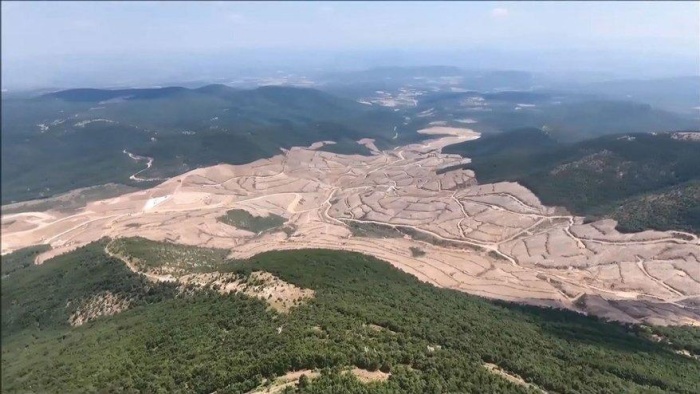 Licenses issued for mining operations that cover 79 percent of the Kaz Mountains in the northwestern province of Çanakkale threaten the environment, according to a recent report from the Turkish Foundation for Combating Soil Erosion (TEMA), the Hürriyet Daily News reported.

Licenses were issued based on information obtained from the General Directorate of Mining and Petroleum Affairs (MAPEG) for roughly 1.3 million hectares of land out of 1.7 million hectares in the area, which define the borders of the Kaz Mountains.

The report by TEMA noted that the mountains were designated as a national park in 1994 and a protected wildlife reserve in 1998.

“The Kaz Mountains are an important site for wildlife. Scientists have identified 800 different plant species to date in the region. The Kaz Mountains were declared a ‘high-quality tourism area’ in the National Tourism Strategy for 2007-2023, and they are home to various cultural heritage sites, whose areas cover 103,000 hectares of land,” the report said.

Amendments to Turkey’s mining law raise the prospect that licenses will be issued for “every inch” of the Kaz Mountains, according to the TEMA report.

“Those ancient cultures and natural assets that have come into existence over millions of years will be put at risk.

The Kaz Mountains are a world heritage site that must be protected against mining operations,” the report said.

According to a report by the Sözcü daily in 2019, the Turkish government issued 279 mining licenses for 155 companies.

Last year, Turkish environmentalists launched a weeks-long protest against a Canadian company’s mining activities in the area. Following the public backlash, the company’s license was not renewed by the government.