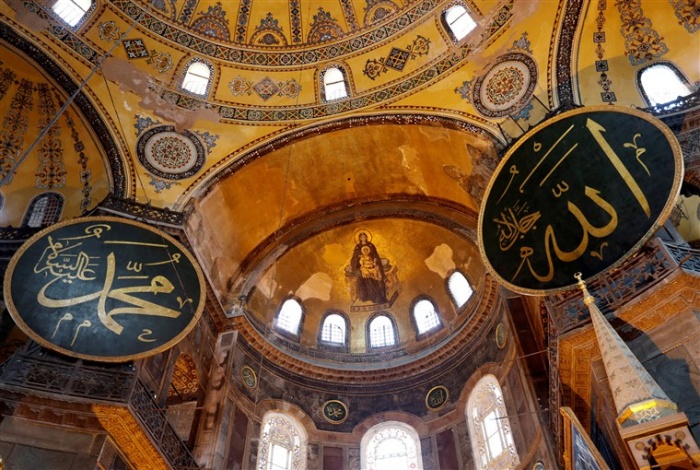 Mosaics in İstanbul’s iconic Hagia Sophia will be covered by curtains or lasers during Muslim prayers, the spokesman for Turkey’s ruling Justice and Development Party (AKP) has said, according to Al Jazeera.

The Christian icons would be uncovered and be open to all visitors at other times, and admission would be free of charge, the AKP’s Ömer Çelik said on Monday, without explaining further.

A Turkish court last week ruled that the conversion of the sixth-century Byzantine site into a museum in 1934 was unlawful.

President Recep Tayyip Erdoğan declared the building a mosque and said the first prayers would be held there within two weeks.

The move drew international criticism and concern, including from Greece, the United States and Russia, as well as UNESCO, which is now reviewing the structure’s World Heritage Site status.

Turkish Foreign Minister Mevlüt Çavuşoğlu said Ankara was surprised by UNESCO’s reaction and would let it know of further steps to be taken regarding Hagia Sophia, which was a Byzantine church for nine centuries before the Ottomans converted it to a mosque.

Turkey is sensitive about protecting its historic character, he said. “We have to protect our ancestors’ heritage,” Çavuşoğlu told state broadcaster TRT Haber.