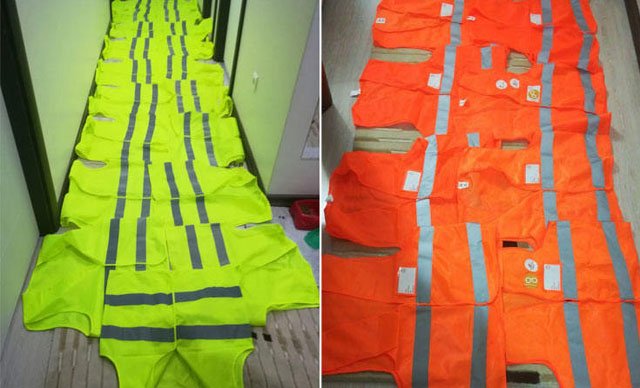 Yellow vests have been found in a house where alleged Gülen movement members were hiding in the western Turkish province of Bursa, the pro-government Demirören news agency (DHA) reported on Monday.

Yellow vests have become the symbol of mass protests in France when tens of thousands of people took to the streets across the country beginning on Nov.17 to protest rising fuel prices. The protesters have been dubbed “yellow vests” due to the high-visibility jackets they adopted as a symbol of their complaint.

As the mass protests in France were going on, some people have talked about the possibility of such protests taking place in Turkey, which frustrated the supporters of Turkey’s Justice and Development Party (AKP).

DHA reported that 22 people were detained during raids in Bursa on homes of followers of the Gülen movement, which is accused by the Turkish government of masterminding a failed coup attempt on July 15, 2016. The movement strongly denies any involvement in the abortive putsch.

According to the agency 19 yellow vests were found during the raid in one suspect’s house and were seized by the police.

Some government supporters were angry with the idea of similar protests taking place in Turkey. One pro-government journalist, Fatih Tezcan, even claimed in a tweet on Dec.8 that people who have bought yellow vests in Turkey since Nov. 17 are terrorism suspects.

The journalist attracted widespread criticism on social media for his remarks.

Turkey experienced mass anti-government protests, known as the Gezi Park protests, in the summer of 2013. The government violently suppressed these protests, which led to the death of more than 10 people.

Following the coup attempt, the Turkish government launched a massive crackdown on followers of the movement under the pretext of an anti-coup fight as a result of which more than 150,000 people were removed from state jobs while in excess of 50,000 others were jailed and some 600,000 people have been investigated on allegations of terrorism.