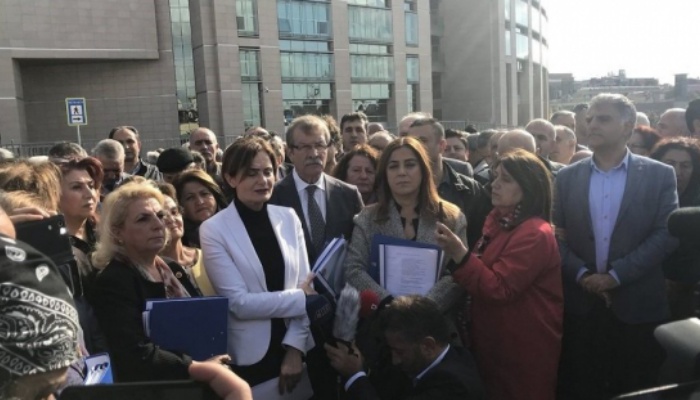 Canan Kaftancıoğlu, the İstanbul provincial chairman of the Republican People’s Party (CHP), has filed a criminal complaint against the İstanbul Metropolitan Municipality (İBB) and the İstanbul Electric Tramway and Tunnel Enterprises (İETT) as well as the İstanbul Water and Sewer Administration (İSKİ) due to some $150 million (TL 753 million) in irregularities she claims were included in the latest report of Turkey’s Court of Accounts, the T24 news website reported on Tuesday.

Before submitting her complaint at the İstanbul Courthouse in Çağlayan, Kaftancıoğlu gave a press statement along with several CHP members who were present, saying: “The Court of Accounts reports for 2017 revealed irregularities and corruption by municipalities run by the ruling Justice and Development Party [AKP]. We are gathered here to file a criminal complaint against them.”

The Court of Accounts audit for 2017 revealed widespread irregularities by public institutions, most notably in the municipalities of İstanbul and Ankara as well as those in the Kurdish-dominated southeastern provinces where government-appointed trustees had replaced elected mayors.

The Ministry of Interior published a written statement on its official website on Tuesday claiming that “untrue reports that appeared on some websites on alleged corruption in municipalities such as Van, Siirt, Tunceli, Şırnak, Hakkari, Mardin, Ağrı and Diyarbakır constitute a manipulation of the Court of Accounts report.”

The ministry also claimed these reports were part of the terrorist Kurdistan Workers’ Party’s (PKK) strategy for local elections in 2019 that aims to regain these municipalities via Peoples’ Democratic Party (HDP) candidates by reducing public support for the government-appointed trustees.

The Bianet news website, however, reported on Tuesday that Fikret Çöker, vice chair of the Court of Accounts, had been dismissed.

In a statement published on its official website on Tuesday, the Court of Accounts denied the allegations that he was dismissed and claimed that “his request to be re-appointed as a member of the court was granted.”