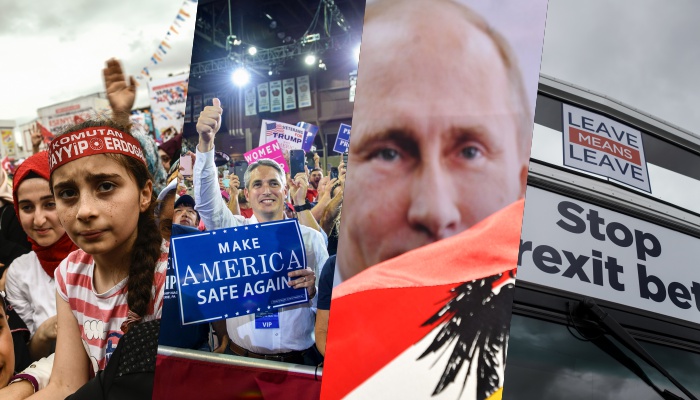 The world as we know it is going through a new phase. Almost every country around the globe is worried about a new type of leadership called “elected autocrat.” Election results cause Western democracies to feel its pressure. The xenophobic, anti-immigration and renewed nationalist and even racist rhetoric that has consumed the West tells us we are experiencing a fresh political wave.

We should understand the concerns surrounding the European elections in which mostly ultranationalist parties increased their support. A rise in ultranationalism, which led to millions of deaths in World War II, has long been feared. However, this time it can clearly be seen that temporary and angry reactions have been gradually been transformed into a permanent state of politics.

One can observe it in the Brexit vote in 2016, causing the UK to leave the European Union, driven by a social reaction that was created by xenophobia, an anti-immigrant stance and nationalist tendencies. Also in Germany, every election undermines Chancellor Angela Merkel’s throne.

The 2016 presidential election in the US disappointed liberals and democrats around the world. Initially underestimated and regarded as uninspired populism, the sentiment of the grass roots was the rise of 21st century nationalism. That is why the election results were shocking. Now, US President Donald Trump presents himself as a nationalist at political rallies and asks for the ecstatic support of the masses.

Is it a coincidence?

Can the rise of strongmen around the world be just a coincidence? Is it just a fluke that the masses around the world and especially in Western countries give credit to popular nationalism and xenophobia?

I would say we are experiencing a new wave of politics. The nation-states created their own phases in the political context and invented a system according to which today’s social reactions are pushing political systems to a new shore.

After the Cold War, globalism provided an alternative to the classic understanding, generating a new political atmosphere. High technology and new means of communication blurred the borders of the nation-state model. The world had become a small village for some, offering a narrow and shared market and a compact culture to everyone.

However, globalism also amounted to the very old trauma: the rich become richer and the poor become poorer. And on top of it there was corruption. Furthermore, this time the economy was based on artificial realities, such as digital assets and speculative concepts instead of concrete manufacturing and labor. Even though stock exchanges possessed lucrative numbers and the budget reports of businesses shone with exponential hikes, the masses living on the periphery were developing a grudge against the rich. And a rule from the old world appeared on the stage again: The satisfied 1 percent could not understand the suffering, doubt and rage among the 99 percent.

The immigration crisis was turned into a scapegoat because nobody could aptly explain the inevitable migration flows from war-torn countries like Syria and Iraq and because necessary steps to integrate those people into Western societies were not immediately taken. Now we have angry masses who think they lost their jobs to those who came from outside and contributed nothing. Expecting a humane approach from these masses doesn’t fit the social reality.

If there was no immigration crisis, could nationalist rhetoric not win the elections? Actually, the immigration crisis was regarded as an excuse. The basic instinct was the discontent stemming from globalization, and nationalism was the most convenient harbor for these unsatisfied masses who thought that liberal democratic elites could not run the countries properly, that they couldn’t address the real problems and that that was why one should recreate the basic values of their communities.

These tendencies were driven by one other factor: terrorism. This formidable threat, which appeared unexpectedly in the middle of their cities, was dreaded in the West. The techniques of terrorism were nothing like the old wars. Nationalist rhetoric seemed like a shelter for many. Labeling terrorism with a certain identity (mostly Muslim) and blaming the people of that particular identity was the easier choice. In fact, the Muslim majority was also fighting those barbaric terrorists. But the miscommunication between those who were affected by terrorism and the Muslim communities was generated by mutual mistakes. Most of the Muslim leaders failed to adopt a solid stance against terrorism, bringing the Arab-Israel conflict to the table as a pretext. Some Muslim political leaders even helped radical terrorism, or at least looked the other way. However, the horror of terrorism is not just a simple worry but a strong sentiment that pushes the masses to ultranationalism and even to fascism. The rest was easy for populist, racist politicians.

This is not only a Western phenomenon, though. We are exposed to this political trend around the world. One of the catalysts of this trend is the developments in Russia. As one might recall, globalism had sung its victory songs over the ruins of the Soviet Union, a victory that saw communism’s collapse. However Vladimir Putin, an ex-secret service agent, constructed a new Russia from the ashes of the old Soviet empire. Western leaders were late to understand what was happening inside Russia. Putin in time both seized power in his country and extended his grip to the former Soviet republics. He weaponized oil and natural gas reserves and kept running “democratic elections,” which did not meet Western standards.

Despite heavy criticism, Putin’s success inspired political leaders in half-baked democracies. He offered a political leadership model that is justifiable by the ballot box and grass roots but on the other hand a model that uses state power extensively to control the media and the judiciary. His model reflects Russian society’s understanding of political management because he keeps increasing his support.

To put it directly, this very model inspired Turkish President Recep Tayyip Erdoğan from start to finish: consolidating his constituency, garnering the support of the majority and creating one-man rule. But he missed the fact that Turkey is not Russia. His country has neither oil nor natural gas reserves. Turkey’s experience of democracy stretches back to 1876. It has had a multiparty political system since 1950. The very first constitution of Turkey was written in 1839, before that of Spain.

So? Turkey’s political culture and economic reality do not match those of Russia. In spite of that, Erdoğan secured the support of the masses by promising well-being to the middle class and presenting himself as a strong leader who challenges the Western powers. Even though this fake heroism was meaningless to Western societies, it invigorated the Turkish public, which has historically struggled with a backward psychology compared to the West. All of Erdoğan’s speeches challenging Germany, the US, Israel or France were about domestic politics only. He clearly knows that Turkey is a country that no world power can ignore due to its strategic geopolitical position. His very strategy to first rail against Western leaders and then pose with them as if nothing happened is both a technique of populism and a way of covering up the fascist rule inside Turkey.

Every era creates its own type of leader. Resemblances between the rising strongmen cannot be understood without taking social reactions and demands into account. It is no coincidence that a Venezuelan leader has very similar characteristics to a Turkish leader and that this kind of leadership is reflected in Western societies.

Unfortunately intellectual rhetoric doesn’t seem helpful in stopping the angry masses from embarking on new adventures that could ruin the world. Moreover, they will not want to look back to past experiences and will proceed to the end. Those who are aware of the danger should continue explaining it to the people in reasonable ways. But the question remains: Will people around the world be able to comprehend what sort of troubled times we’re experiencing before it’s too late?