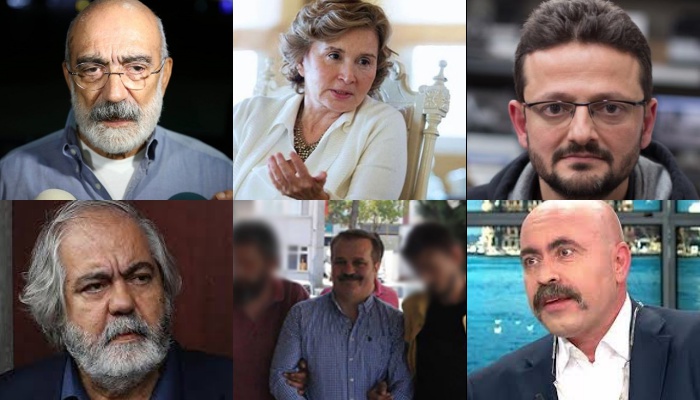 The journalists were given the sentences by the İstanbul 26th High Criminal Court in February after their conviction of attempting to destroy the constitutional order.

The appeals hearing of Ahmet Altan, Mehmet Altan and Ilıcak as well as two former employees of the now-closed Zaman newspaper, Zaman brand marketing manager Yakup Şimşek and art director Fevzi Yazıcı, along with former Police Academy lecturer Şükrü Tuğrul Özşengül, was held at the 2nd chamber of the İstanbul Regional Court of Law, which serves as an appeals court. Ahmet Altan’s brother, Mehmet Altan, an economics professor and journalist, was also given an aggravated life sentence, but was released pending appeal in June based on a decision of the Constitutional Court, which said Altan’s rights were violated during the trial. Mehmet Altan had been in pre-trial detention since September 2016.

Both Mehmet Altan and Ahmet Altan, who were detained on Sept. 10, 2016, were accused of sending “subliminal” messages regarding a failed coup attempt on July 15, 2016 on a TV show a day before the abortive putsch.

The appeals process of the journalists will now continue at Turkey’s Supreme Court of Appeals. During this process, Mehmet Altan will not be jailed.

Ilıcak said in court on Tuesday that her defense is being ignored although she has refuted all the accusations directed against her.

The journalist said the Constitutional Court’s ruling on Mehmet Altan sets a precedent for her case and that the top court, which will take up her case this month, will probably rule for a rights violation in her case as well.

“I did not commit a crime. I am asking for the end of my victimization by an acquittal or at least by my release based on the top court’s ruling on Mehmet Altan,” Ilıcak told the court.

Ilıcak used to work for the Bugün daily, the Özgür Düşünce daily and Can Erzincan TV, which were all closed down by the Turkish government following the coup attempt due to their links to the Gülen movement, which is accused by the government of masterminding the failed coup. The movement strongly denies any involvement in the failed putsch.

Yazıcı’s lawyer, Mesut Yazıcı, said his client had nothing to do with a Zaman daily TV commercial that is associated with the coup attempt, adding that the daily’s then-editor-in-chief Ekrem Dumanlı had the only say over the paper’s TV commercials from their preparation for the broadcasting stage.

It is claimed in the indictment that the Zaman TV commercial, aired nine months, 10 days prior to the failed coup on July 15, 2016, was a signal for the military coup attempt by the Gülen movement. Prosecutor Murat Çağlak claimed that through TV ads in which a baby smiles after scenes of chaos the Gülen movement sent messages to its members.

Zaman was also closed down by the government following the coup attempt due to its links to the Gülen movement.

The lawyer asked for the acquittal and release of his client.

In his defense, Mehmet Altan said he was given the jail sentence without any concrete evidence of a crime against him.

The journalist read the Constitutional Court’s verdict on him, which ruled that his right to freedom and safety has been violated.

Özşengül, who was the next to deliver his defense, said he and the other defendants in the trial are unfortunately being subjected to a criminal law that is seen in fascist governments.

“I am getting an aggravated life sentence without any concrete evidence being presented against me. … It is very surprising for me to be in this trial,” said Özşengül.

Şimşek said he has been jailed for 793 days without any concrete evidence of a crime against him.

“I am asking for my acquittal or at least my release. Being tried without arrest is the norm. I want to see my old parents,” he said.

Ahmet Altan, who was the last to make his defense during Tuesday’s hearing, accused the court of disregarding the Constitutional Court’s ruling on Mehmet Altan, saying that he and the other defendants are being tried by judges who refuse to comply with the Constitution.

“They want to punish me, but they can’t find anything in the law and judicial system to legitimize it. They can’t find it and will not do so. Because I am right. I don’t care about spending my life in a prison cell because I feel myself wandering in a comic book. Nothing seems serious or startling to me. When you base a punishment on a ‘subliminal message,’ ‘immaterial force,’ ‘abstract threat,’ then that punishment has no seriousness,” Ahmet Altan said, underlining the weakness of the evidence against him.