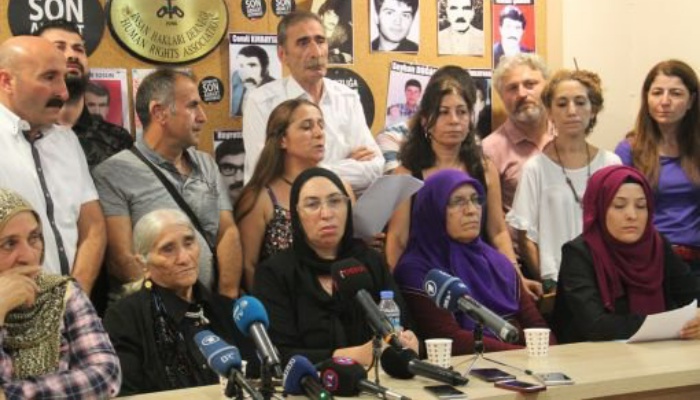 The Saturday Mothers, a group of activists and relatives who have been seeking the whereabouts of loved ones who disappeared while in police custody in the 1990s, on Friday asked for an appointment with Turkish President Recep Tayyip Erdoğan after their 700th gathering in İstanbul’s Galatasaray Square was marred by police violence last Saturday, the Bianet news website reported.

“Finding our missing ones and securing justice is the duty of the state. Due to the negative approach of the [interior] minister and government officials, we are addressing this to you, who pledged to the mothers at a meeting held on Feb. 5, 2011 to find a solution, saying that ‘your problem is my problem’,” the families of seven missing persons wrote in a fax sent to the presidential office.

After last Saturday’s events, ruling Justice and Development Party (AKP) spokesperson Ömer Çelik announced that the Saturday Mothers would no longer gather in Galatasaray Square to voice their demands.

“We as the relatives of the missing will be at Galatasaray Square in our 701st week just like every other Saturday. We will not give up searching for our missing ones and demanding justice until the fate of every last person who disappeared in the custody of security officers is explained and their bodies are delivered to his or her family and all the perpetrators are brought to justice,” the Saturday Mothers said in response to Çelik during a press conference at the offices of the Human Rights Association (İHD) office on Friday.

The families stated that since May 27, 1995, they have asked to be informed about their relatives, whose existence has been denied since they were detained by law enforcement, and they demand that those who disappeared them be punished through a fair trial.

They recalled that seven years, eight months have passed since their meeting with then-Prime Minister Erdoğan and said that despite the publication of a parliamentary commission report on disappeared people, no legal action has been taken in even one case.

They also said they have not witnessed any progress concerning the truth being revealed and justice being served. The families also said the police intervention at the 700th rally last Saturday had damaged their hope for justice.