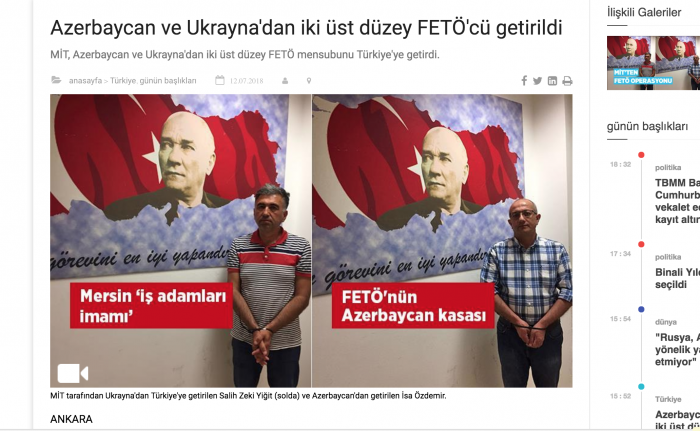 Turkish agents abducted two people from Azerbaijan and Ukraine through an “intelligence service operation” and detained them in Turkey over Gülen movement links on Thursday, the state-run Anadolu news agency reported.

İsa Özdemir graduated from Baku State University in 1997 and has been living in Azerbaijan since then running the Avro 2000 construction firm. The Ankara 2nd Penal Court of Peace had issued a detention warrant for him some time ago.

Salih Zeki Yiğit fled Turkey and landed in Ukraine after a coup attempt on July 15, 2016, when a witch-hunt against the Gülen movement was launched on accusations of masterminding the failed coup. A Mersin Penal Court of Peace had issued a detention warrant for him.

The two suspects are accused of membership in a “terrorist organization” in Turkey.

Former Deputy Prime Minister Bekir Bozdağ stated in April that the National Intelligence Organization (MİT) had abducted 80 nationals from 18 countries for their alleged links to the Gülen movement.

In one of the most recent operations, Kosovar police detained five teachers and a doctor and handed them over to Turkish officials in March.