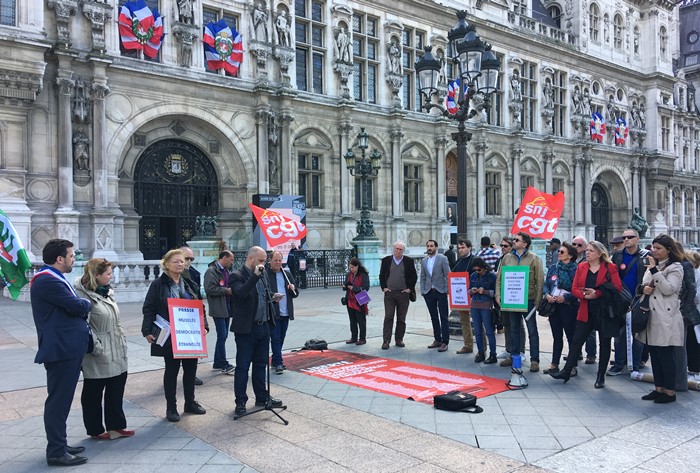 The International Federation of Journalists (IFJ), National Journalists Union (SNJ) and CFDT-Journalists voiced concern for journalists jailed in Turkey and expressed solidarity with them in a program organized for World Press Freedom Day in Paris.

Speaking at a gathering in front of Paris’ historic municipal building, Anthony Bellanger, secretary-general of the IFJ, described Turkey as the world’s worst jailer of journalists.

The names of the jailed Turkish journalists appeared on a banner at the venue with a picture of Erdoğan, with a call to him to release the 151 journalists who are currently in prison.

“Under Turkey’s broad anti-terrorism law and state of emergency, journalism itself has been criminalized. Reporters face prison merely for doing their job. More than a hundred media outlets have been closed down since the plot [on July 15, 2016,” said former editor-in-chief of the Cumhuriyet daily and exiled journalist Can Dündar in a message read out at the event.

Expressing how the Turkish media had come under the control of President Recep Tayyip Erdoğan, Dündar called on the international media and journalists to help Turkish journalists in their fight.

“Please open your pages to the prisoners of thought. Give them a chance to write for your paper. Read their books, novels, poems and news stories. Go to Turkey to observe our hearings. Let the world hear our voice of freedom.”

The Stockholm Center for Freedom (SCF) reports 191 journalists in Turkey have been arrested, 142 are currently being sought and 62 have been convicted.

Turkey is ranked 157th among 180 countries in the 2018 World Press Freedom Index released on April 25 by Reporters Without Borders (RSF).