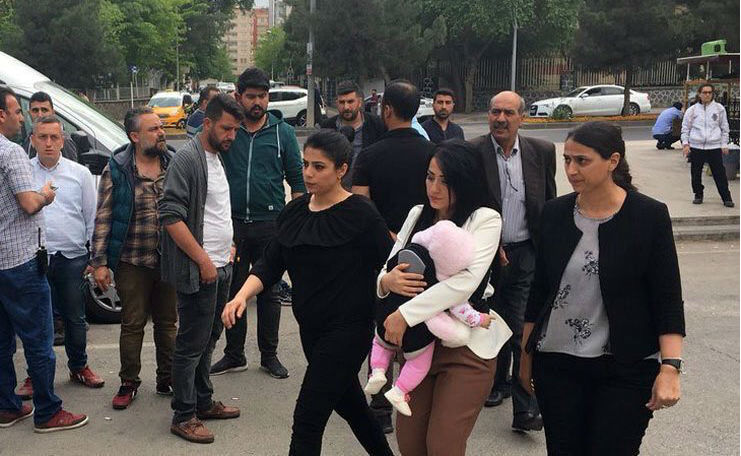 The International Freedom of Exchange (IFEX) has launched a signature campaign calling for the release of Turkish teacher Ayşe Çelik, who was jailed with her baby earlier this month, on terror charges because she had said, “Don’t let children die” on a TV program.

IFEX is a global network of over 119 independent nongovernmental organizations working at the local, national, regional and international level to defend and promote freedom of expression as a fundamental human right.

Çelik was sentenced to one year, three months in April 2017, and an appeals court upheld the sentence in October. She was jailed on April 20 with her six-month-old baby.

An investigation was launched into Çelik, an unemployed teacher from the southeastern Turkish province of Diyarbakır, after she called in to the popular “Beyaz Show“ on Jan. 8, 2016 and urged authorities to take action to prevent the killing of children in clashes between Turkish security forces and the terrorist Kurdistan Workers’ Party (PKK).

IFEX has invited supporters of freedom of expression to respond to a call for 100,000 signatures for the releasing of Çelik.

During the TV program, Çelik said: “Are you aware of what’s going on in the country’s east? What’s happening here is misrepresented on television. Don’t stay silent! Please show more sensitivity as human beings! See us, hear us and give us a hand! I’d like to address the teachers who have abandoned their students. How are they going to return there? How are they going to look those innocent children in the eye? What a pity! Don’t let people die. Don’t let children die. Don’t let mothers cry.”

The host of the program, Beyazıt Öztürk, had the audience applaud her by saying: “We are trying our best to make it heard. Your words have been a lesson for us. We will continue to do more. Hopefully your wishes for peace will be realized as soon as possible.”

In the aftermath of a failed coup attempt on July 15, 2016, more than 17,000 women from all walks of life including teachers, doctors and housewives have been jailed in Turkey on coup charges in government-led operations. There are currently more than 700 children accompanying their mothers in Turkish jails.