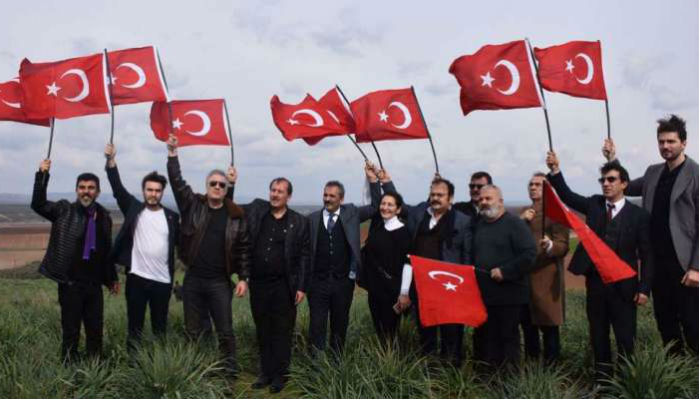 Following a call from Turkish President Recep Tayyip Erdoğan last month who said Turkey is in need of new anthems and marches to describe events such as an ongoing military offensive in the Afrin region of Syria, some Turkish singers wrote a march for the Afrin operation.

The lyrics of the “Turkey March” were written by İbrahim Altıntaş, while famous Turkish singer Mustafa Ceceli composed it.

The clip was made shortly after a group of celebrities travelled to the southern province of Hatay with President Erdoğan to show solidarity with the Turkish soldiers fighting in Afrin.

The celebrity figures attracted widespread criticism for spreading propaganda for the Afrin operation, which many say is aimed at winning Erdoğan points in next year’s presidential and general elections.

Speaking at the 46th meeting of neighborhood heads, or muhtars, at the presidential palace on March 14, Erdoğan said even his grandchildren were parading around the house to the sounds of the Mehter March (of the Ottoman Janissaries) and that Turkish soldiers should march to the accompaniment of new anthems similar to the Mehter March.

“For instance, we don’t have a poem, a march, that truly describes our 34-year-long fight against [Kurdistan Workers’ Party (PKK)] terrorism. I recently talked to friends about this. Why can’t we write a song for the ongoing Operation Olive Branch in Afrin? I don’t want to say like Turkey’s national anthem because they would not live up to that level, but one like the Mehter March? We also don’t have a poem or anthem for the July 15 legend that will describe it like the words of [Mehmet] Akif in the Çanakkale [poem] and the national anthem,” Erdoğan said.

On Jan. 20, the Turkish military and the Free Syrian Army (FSA) launched the operation in Afrin against the Syrian Kurdish Democratic Union Party (PYD), which Turkey sees as the Syrian extension of the PKK.