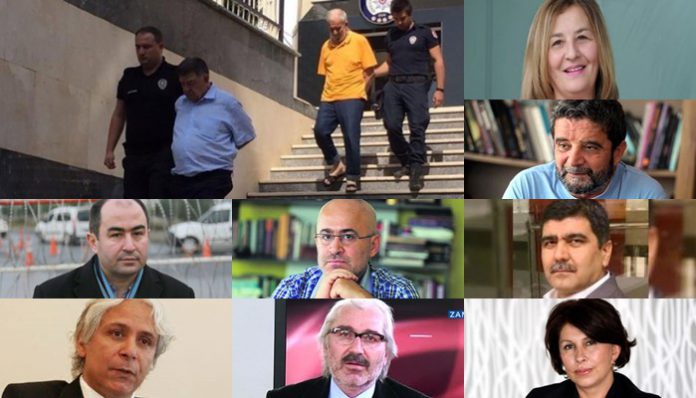 An İstanbul court on Friday ruled for the release of three advertising and sales department staff members of the Zaman media group while keeping 19 journalists including veteran columnists in prison, a continuation of the pretrial detention of 21 journalists and staff of the Zaman daily, which was shut down by the government last year, P24 reported.

In the third hearing at Silivri Prison, the İstanbul 13th High Criminal Court ruled to release Hüseyin Belli, Onur Kutlu and İsmail Küçük, rejected requests to lift the travel bans of several other journalists and scheduled the next hearing on April 5, 2018.

Thirty-one Zaman media members face three aggravated life sentences each for “attempting to change the constitutional order and overthrow the government and Parliament” and prison sentences from seven-and-a-half to 15 years for “membership in a terrorist organization.”

The Zaman daily, which was affiliated with faith-based Gülen movement, was first unlawfully seized by the Turkish government on March 4, 2016 and then closed down by government decree in the aftermath of a failed coup attempt on July 15, 2016.

During the hearing journalist Mehmet Özdemir asked the court to explain the evidence that is being used to continue his detention.

“I demanded to learn about the evidence against me on June 7 but received no response. I asked the same questions during the first hearing. We have come to the second hearing and still nothing. It seems I am nothing in the indictment or to the court, but I have been in prison for 16 months,” said Özdemir, a journalist for 20 years.

“There is not even a small piece of evidence against me because there is no crime that I’m accused of.”

“My name is mentioned in the suspect list in the indictment, but I still don’t know what I’m accused of,” said veteran journalist İbrahim Karayeğen, adding: “It seems that journalism is on trial here. Journalism is not a crime.”

Columnist Türköne also asked for evidence from the court. “As head of the court, you should have informed us. Many of my colleagues do not know the evidence on which they are being tried.”

“I would like to present the 10 columns that were mentioned in the indictment as evidence against me, as evidence for me,” added Türköne.

“This case is a result of the ambition of revenge, political resentment,” columnist Ahmet Turan Alkan said, adding: “Is it so easy to steal 500 days from a person’s life with this many unserious allegations?”

Stating that he wrote for Zaman for 20 years, Alkan said: “I wrote things that I believed. I have no engagement with either [President Recep Tayyip] Erdoğan or [Turkish Islamic scholar Fethullah] Gülen. I am proud of that.”

Underlining that the government sends messages to critical journalists by means of jailed journalists, Alkan said: “We are the best example. The columnists of Zaman have been abandoned.”

“I do not expect mercy from you. I do not want any goodness other than abiding by the law.”

Columnist Ali Bulaç also asked for his release. “The columns that were mentioned in the indictment were published years ago. According to the law, the statute of limitations is four months.”

“Being a columnist for Zaman is mentioned as a crime in the indictment. There is no other evidence.”

“I have been in prison for 500 days. I do not know why I’m in prison. I am not a terrorist. I have never engaged in violence,” said columnist Mustafa Ünal. “I have written thousands of articles. You cannot show me even a word supporting the coup. I am not a member of any organization. You have to prove it if you allege it.”

Underlining that he would not have written for Zaman if the Gülen movement had been legally declared a criminal organization, veteran columnist Şahin Alpay explained his serious health problems. “I want you to end this injustice and let me to spend rest of my life with my wife, children and grandchildren,” he said.

Columnist İhsan Dağı recalled that he stopped writing for Zaman in April 2014 and added: “How can I be linked with a vile attempt that took place two-and-a-half years later?”

Columnist Orhan Kemal Cengiz asked why none his columns were mentioned in the indictment although he was listed as columnist.

Ahmet Metin Sekizkardeş also asked for evidence. “Three aggravated life sentences have been demanded, but there is not single sentence about how I am a member of the organization.”