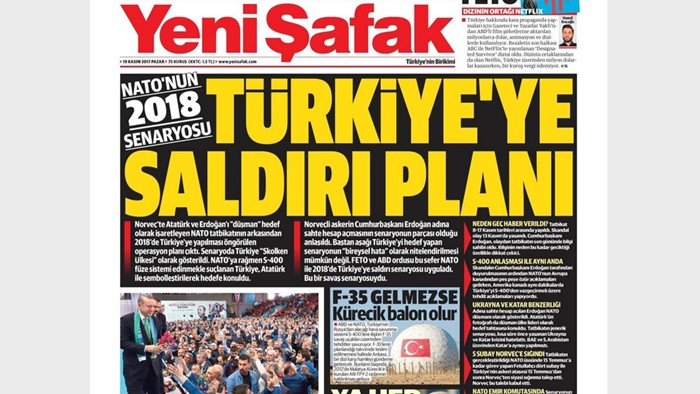 The Yeni Şafak daily, a staunch supporter of Turkish President Recep Tayyip Erdoğan and the government, on Sunday said NATO plans to attack Turkey in 2018.

In its lead story, the daily claimed that a recent NATO enemy chart scandal during a drill in Norway was part of the alliance’s planned attack on Turkey.

The image of Atatürk, the founder of Turkey, was displayed by a technician as a target during a NATO military exercise in Norway held between Nov. 8 and Nov. 17. In a second incident an alliance officer posted defamatory comments about Erdoğan on an intra-NATO social media site. The technician and the military officer were later sacked, and Ankara withdrew 40 soldiers from the drill.

“The scenario that targets Turkey cannot be evaluated as a ‘personnel mistake.’ Feto [a derogatory term coined by the ruling Justice and Development Party (AKP) to refer to the Gülen movement] and the US military have put a scenario of attacking Turkey into practice. It was a scenario,” the daily said.

“The real scenario is to show Turkey as an enemy of NATO by spreading fabricated views about President Erdoğan. Make Erdoğan a target in NATO countries by showing Turkey as being against NATO. And conduct an operation like July 15 [coup attempt] in Turkey in 2018 with Feto and the US.”

The daily also claimed that the US and NATO use the F35 jets purchase to stop Turkey from buying a Russian S-400 air defense system. If the F35 jets are not delivered to Turkey on time, Ankara will respond by removing the AN-TPY 2 radar that was set up in Malatya province in 2012 as part of a NATO missile defense system.

The ultranationalist Aydınlık daily on Sunday called for the closure of NATO bases in Turkey. The newspaper, which is known for its pro-Eurosianist line, on Saturday had called on the Turkish government to leave NATO.

Both Islamist and ultranationalist/Eurosianist circles in Turkey have been pushing the idea of closing NATO/US bases in Turkey and leaving the alliance.

On Nov. 5, the Star daily, a strong supporter of Erdoğan, said NATO had started a new military drill in the Mediterranean to surround Turkey. “The US, Germany and Greece have launched a missile drill called Artemis to attack ‘an enemy in the East’,” the newspaper said in its lead story.

“The US, which selected terrorist organizations the PKK/PYD [Kurdistan Workers’ Party/ Syrian Kurdish Democratic Union Party] for an alliance and equipped them with heavy weapons, has taken another step against Turkey that became pretty clear following the coup attempt on July 15 [2016]. Washington, which has imposed a covert weapons embargo on Turkey, and Germany, which talks about ‘occupying Turkey,’ have launched a joint missile drill in Greece,” the daily claimed.