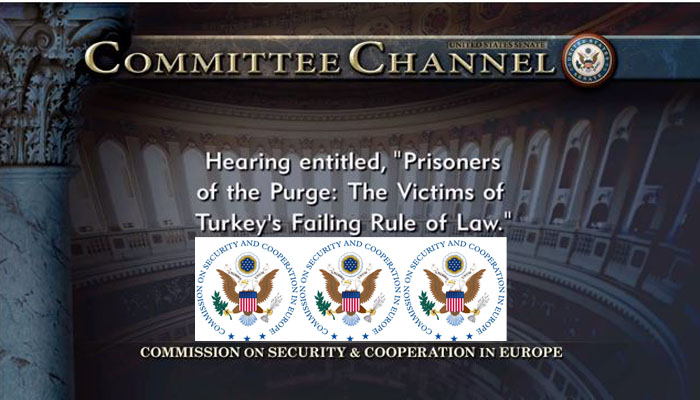 The US Commission on Security and Cooperation in Europe (CSCE), aka the Helsinki Commission, held a hearing on Wednesday on the victims, including US citizens, of a crackdown by the Turkish government following a failed coup last year.

During the hearing, titled “Prisoners of the Purge, The Victims of Turkey’s Failing Rule of Law,” the CSCE, chaired by US Senator Thom Tillis, heard Jonathan R. Cohen, deputy assistant secretary, Bureau of European and Eurasian Affairs; CeCe Heil, American Center for Law and Justice executive counsel; Jacqueline Furnari, daughter of US pastor Andrew Brunson, who was jailed in Turkey more than a year ago over alleged links to the coup attempt; and Nate Schenkkan, director of the Nations in Transit Project at Freedom House.

The commission examined the factors contributing to the detention of American citizens, particularly Brunson, and US consulate employees in Turkey as well as the judicial processes to which they have been subject.

Speaking during the hearing Cohen said the US doesn’t believe the charges against Brunson, which include espionage, attempting to overthrow the Turkish government and membership in a terrorist organization, are accurate.

He also underlined that US authorities are carefully reviewing the material provided by Turkish authorities for Pennsylvania-based Turkish Islamic scholar Fethullah Gülen’s extradition. The Turkish government accuses Gülen and his movement of being behind the failed coup. Gülen strongly denies any involvement.

Also speaking during the hearing, Brunson’s daughter Jacqueline said the accusations against her father are “absurd” as he has never been involved in any crime in Turkey, where he lived for 23 years.

Despite the efforts of the president of the United States, among many others, Brunson has spent more than a year in jail without trial on national security charges. Additionally, a Turkish-American NASA scientist and two Turkish employees of US consulates stand charged with terrorism offenses.

Brunson was jailed in October 2016 for his links to the Gülen movement and was charged with acquiring secret political and military information, attempting to destroy constitutional order and overthrow the Turkish Parliament.

Speaking during a police academy graduation ceremony in Ankara on Sept. 28, Turkish President Recep Tayyip Erdoğan called on the US to extradite Gülen in return for releasing Brunson.

Earlier in May, CNN Türk reported that US President Donald Trump asked Erdoğan to secure to release of Brunson during his visit to the White House.

A statement released by the White House also said Trump asked for Brunson’s release three times and his immediate deportation to the US during a meeting with Erdoğan.

Brunson, a North Carolina native, has been in custody since October after he and his wife were detained on immigration violation charges. At the time, the Brunsons were running a small Christian church in İzmir. They had lived in Turkey for 23 years.

Brunson’s wife, Norine, was soon released, but the pastor remained in custody and soon saw his charges upgraded to terrorism. Prosecutors have suggested in court hearings that Brunson is being held on suspicion of being a follower of Gülen.

Turkey’s relations with US became further strained a diplomatic crisis erupted on Oct. 6 when Turkish authorities arrested Metin Topuz, a Turkish employee of the US Consulate General in İstanbul, on espionage charges.