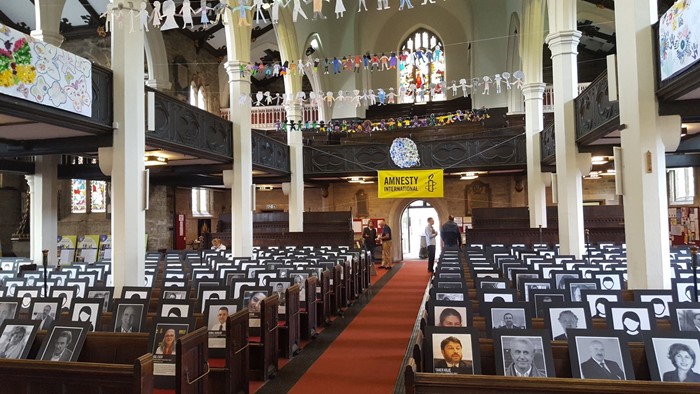 International human rights organization Amnesty International’s UK Kirklees branch on Friday opened a two-day photo exhibition titled “Free the Turkish Journalists” at Huddersfield Parish Church as a show of solidarity with Turkish journalists who have been jailed by the Turkish government.

Amnesty Kirklees said in an announcement that “The pews of the town Centre Church will be filled with photographs and information relating to those journalists who have been detained in a clampdown by the Turkish state following the attempted coup there.

“Our exhibition attempts to convey the impact of all these journalists being removed from society and stopping their role of telling truth to power and the people they are meant to serve. We want people to come into the church to see the photographs and help by writing a short message of support to a detained journalist on one of our post cards, an we will send it to them on your behalf.”

Turkey is the biggest jailer of journalists in the world. The most recent figures documented by the Stockholm Center for Freedom (SCF) showed that 281 journalists and media workers were in jail as of Sept. 26, 2017, most in pre-trial detention. Of those, 256 are under arrest pending trial and 25 journalists have been convicted and are serving their sentences. Detention warrants are outstanding for 135 journalists who live in exile or remain at large in Turkey.

Detaining tens of thousands of people over alleged links to the faith-based Gülen movement, the government also closed down more than 180 media outlets after a coup attempt in Turkey on July 15, 2016. Turkey’s Contemporary Journalists’ Association (ÇGD) recently announced that more than 900 press cards were cancelled.