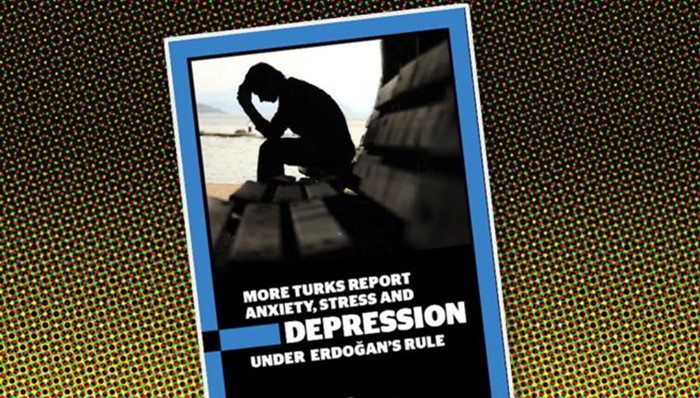 The escalating crackdown on fundamental rights and freedoms in an increasingly repressive regime in Turkey under the autocratic leadership of President Recep Tayyip Erdoğan might have very well contributed to a spike in stress, depression and anxiety in Turkish society, a recent study done by the Stockholm Center for Freedom (SCF) has revealed.

Among those polled, 86.3 percent said they experience a high level of depression, followed by 78.8 percent stating they struggle with stress and 72.1 percent reporting they battle anxiety. The study, based on a number of self-reported questionnaires among Turks, indicated that 65.1 percent of participants described themselves as being unhappy to varying degrees, while 34.9 percent considered themselves to be happy, again at varying levels, SCF reported.

This shows that rapid backsliding in the rule of law, democratic rights and fundamental freedoms coupled with a worsening outlook on the economy and increasing violence and terror incidents might have taken a toll on the psychological well-being of Turkish society. It also reveals that the Turkish government is failing in its responsibility to shore up feelings of happiness among Turks, especially against the backdrop of the government’s blatant interventions in individual rights and freedoms.

Considering that among other things, personal happiness is connected to individual beliefs, faith, dreams, ideologies, sensitivities and perceptions on which no one including the authorities is called upon to pass judgment, stigmatize, vilify or interfere with, the Turkish government’s real or perceived interference with individual choices in Turkey may have contributed to this worsening picture.

According to Turkish Health Ministry statistics, anti-depressant use has increased 23.2 percent, from 35.4 million boxes in 2014 to 43.6 million in 2015. In the first nine months of 2016, the latest available data, this rose to 33.6 million boxes of anti-depressant drugs. It was reported that one in every 10 persons in Turkey is using anti-depressants. The Health Ministry also announced on Aug. 5, 2014 that 9.2 million Turks went to hospitals and clinics to seek treatment for psychological problems, up from 3 million in 2009.

Turkey’s main opposition Republican People’s Party (CHP) submitted a motion in Parliament on Dec. 10, 2015 asking for the establishment of an investigation commission to look into rising cases of psychological disorder. The motion has not yet been debated in Parliament. A similar motion was also submitted on March 1, 2015 by the pro-Kurdish Peoples’ Democratic Party (HDP), but that motion was not taken up in Parliament before the legislative session ended, killing the motion.

The Turkish government’s unwillingness to investigate the root causes of rising cases of psychological disorder and the high usage of anti-depressants defies common sense. It is most likely that the government does not want to be blamed for this and that it rather tries to sweep the dirt under the rug, according to SCF. The current Islamist regime in Turkey has constantly been criticized by observers for undermining the personal and collective enjoyment of life among ethnic and social groups, especially targeting vulnerable groups in the last couple of years with a relentless persecution of critical groups such the Kurdish political movement, Alevis and the Gülen movement.

In the study, which aimed to explore the prevalence of mental health problems and their relationship to happiness, a Turkish version of the Depression, Anxiety and Stress Scale (DASS-42) was used to measure psychological mood disorders, while the happiness level was assessed by using a Turkish version of the Subjective Happiness Scale. Along with these two scales, a socio-demographic questionnaire was created to measure a number of socio-demographic factors. A total of 358 people took part in the study with a mean age of 36.1 (standard deviation = 9.5).