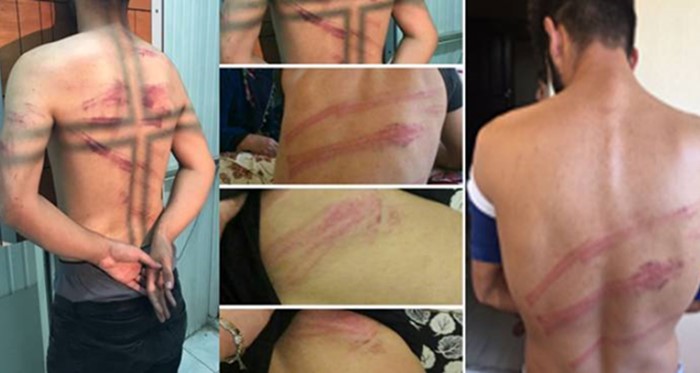 A report by the pro-Kurdish Peoples’ Democratic Party (HDP) concerning an incident of villagers allegedly tortured by police in the Şemdinli district of Hakkari said 36 villagers were tortured with truncheons, rifle butts, mop sticks, hoses and iron rods for one hour, the Cumhuriyet daily reported on Thursday.

The HDP announced the report findings in Van province on Wednesday during a “Conscience and Justice Watch,” launched by the HDP as part of a series of protests that will continue until Nov. 4, the anniversary of the detention of HDP Co-chair Selahattin Demirtaş along with eight other party deputies.

According to the HDP report, “36 people were tortured with truncheons, rifle butts, mop sticks, short-cut hoses and iron rods for one hour, and later on with the intervention of police officers from the district police station, the 36 people were taken to a jail, and the torture ended when detainees were put in jail. On the same day 20 people out of the 36 detained were released without proceedings.”

HDP deputy Özgür Zeydanoğlu said an operation was launched in a village in Hakkari’s Şemdinli district on July 5 after one police officer was killed during a clash with Kurdistan Workers’ Party (PKK) terrorists.

“During the first operation six people, most of whom were former HDP executives or members, were detained, battered and tortured. Other family members in their houses experienced serious insults; all family members, from 90-year-old women to six-year-old girls, were battered. Six people, despite their wounds, were made to wait four hours near the central mosque and were tortured either by walking over them or severely beating them. During the operations between 4:30-7:30 a.m. in the Butu and Meydan neighborhoods, almost all family members in the houses experienced serious insult and torture. While almost 100 people were beaten and tortured, a total of 36 people were detained,” said Zeydanoğlu as he read the report.

The report said a doctor from Şemdinli Hospital refused to provide a battery report or treat Bünyamin Atahak, saying, “You are from Şapatan village, you are terrorists.”

After the incidents were shared on social media, 16 people were released on Aug. 7 and battery reports were given to some victims when the chief public prosecutor’s office intervened.

The Hakkari Governor’s Office said on Thursday that a police officer was suspended over a “strong suspicion” of his involvement in torturing the villagers after victims filed complaints with the Şemdinli Public Prosecutor’s Office.

The Hakkari Governor’s Office also rejected claims in the national media that police officers tortured several villagers in Şemdinli but added that “necessary steps will be taken against the security personnel if any evidence of their involvement in torture is found.”