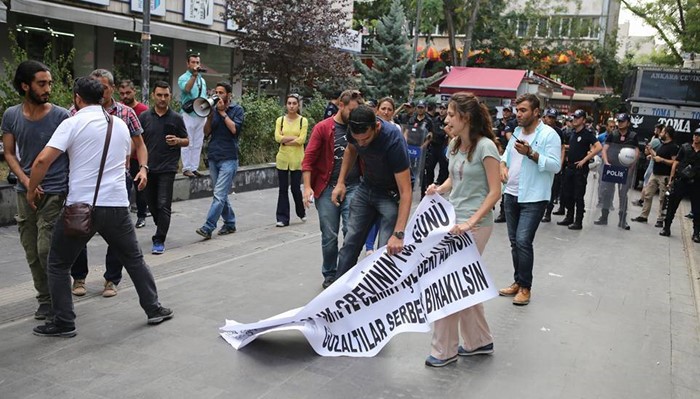 Beyza Gülmen, the sister of academic Nuriye Gülmen, was detained on Monday during a protest to support jailed educators Gülmen and Semih Özakça, who have been on a hunger strike for 138 days.

The protesters gathered on Ankara’s Yüksel Street to show their support for the imprisoned hunger strikers. Turkish police intervened when the group tried to make a press statement in front of a monument known as the Human Rights Monument.

The two educators, who were on the 76th day of a hunger strike when they were arrested on terror charges on May 23 in Ankara, protested their dismissal under state of emergency decree-laws before the same monument.

A demand by the lawyer of Gülmen and Özakça for their release was rejected by the Ankara 19th High Criminal Court on June 30, which argued that being in prison did not pose a threat to the lives and physical or moral integrity of the educators.

Gülmen was fired from Konya Selçuk University, and Özakça was a teacher at a primary school in Turkey’s eastern province of Mardin before he was purged over ties to a “terrorist” organization.