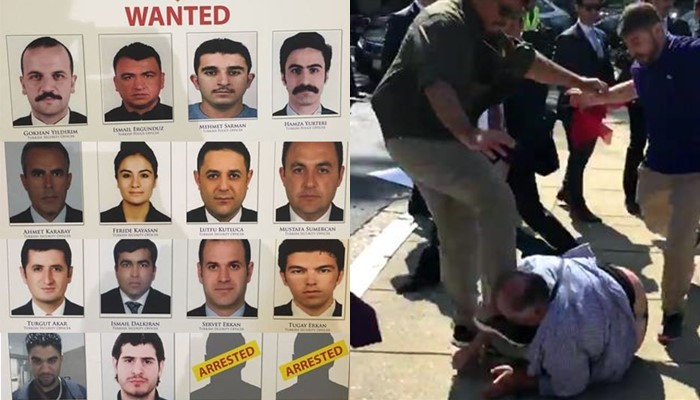 German authorities have signaled that they do not want the members of Turkish President Recep Tayyip Erdoğan’s security detail who attacked protesters in Washington last month allowed into Germany for the G-20 summit in Hamburg on July 7-8, Deutsche Welle reported on Sunday.

According to the report the German foreign ministry has informed the Turkish side that the guards who are wanted by the US due to the attack on protesters in Washington should not come to Germany.

On Wednesday the Hamburg police warned Turkish guards not to attack protesters during the G-20 summit.

On May 16, members of President Erdoğan’s security detail engaged in a violent brawl with a group of protesters outside the residence of the Turkish ambassador in Washington while Erdoğan was paying an official visit to the country. At least 11 protesters were injured.

“The scene of guards of the Turkish president attacking protesters in Washington will not occur in Hamburg, where the police will be in charge,” Ulf Wundrack, spokesperson for the Hamburg police, told Deutsche Welle.

On June 17, the D.C. Metropolitan Police Department released a video of eight more “persons of interest” believed to be in Erdoğan’s security detail who were involved in the attack on protesters in front of the Turkish ambassador’s residence on Sheridan Circle.

The Washington police department on June 15 issued a wanted list for 12 of President Erdoğan’s bodyguards as criminal suspects for their attacks on protesters on May 16.

Erdoğan slammed the US decision to issue arrest warrants for his bodyguards and said he would initiate a political and legal battle against the warrants.

On June 16, US Secretary of State Rex Tillerson said there would be no tolerance for those using intimidation and violence to suppress freedom of expression, in reference to the arrest decision issued for Erdoğan’s bodyguards.

The demonstrators had gathered to protest the policies of Erdoğan, who was in the capital for a meeting with US President Donald Trump. When Erdoğan later arrived at the ambassadorial residence, his security detail, along with supporters of the Turkish president, was captured in video footage brutally attacking the group of demonstrators.

Erdoğan was also seen in the footage watching his bodyguards assault the protesters.