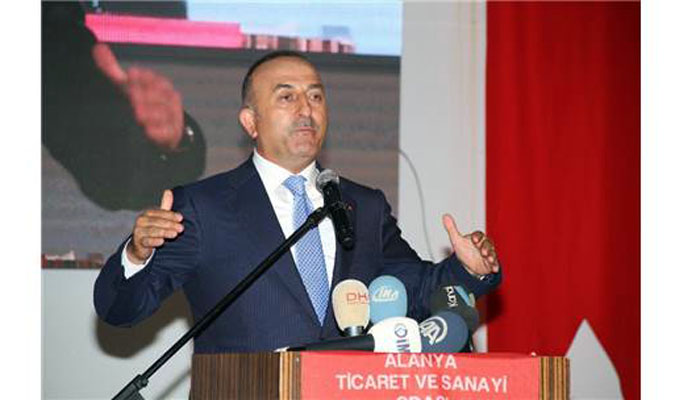 Turkish Foreign Minister Mevlüt Çavuşoğlu slammed Germany over its alleged support for terrorist groups, saying Turkey is not a country to which Berlin can dictate whatever it wants.

Speaking during an iftar dinner at the Alanya Chamber of Trade and Industry (ALTSO) in southern Antalya province on Saturday, Soylu said Germany has been tolerating on its soil terrorist groups that are against Turkey, Turkish media reported.

Underlining that Germany has been a safe haven for followers of the Gülen movement, which Turkey accuses of masterminding a failed coup last summer, supporters of the Kurdistan Workers’ Party (PKK) and Revolutionary People’s Liberation Party-Front (DHKP-C), Çavuşoglu said Germany had turned a blind eye to the PKK’s drug smuggling and other activities.

“Then they say they want to visit İncirlik,” he said, recalling a recent row that led Germany to pull its troops out of İncirlik Airbase after Turkey turned down a request to permit German lawmakers to visit their troops based at the airbase, posted there as part of the anti-Islamic State in Iraq and the Levant (ISIL) coalition.

The Bundeswehr has about 280 military personnel stationed at İncirlik, from where they fly Tornado surveillance missions over Syria and refuel flights for partner nations in the coalition against ISIL.

German Chancellor Angela Merkel said on Wednesday that Germany would move its Bundeswehr troops at Turkey’s İncirlik Airbase to Jordan as it has no more patience with Ankara over its refusal to allow German lawmakers to visit the troops at the base.

“We need an unlimited right to visit for a parliamentary army. We will go to Jordan. Of course, beforehand, we will speak to our partners in the anti-IS coalition about how to provide replacement services during the relocation period,” she said in a video shared by DW on Twitter.

Turkey’s relations with European countries, including Germany, detoriorated over Turkey’s violation of human rights especially after a failed coup in last summer.

Over 138.000 people have been dismissed from their jobs, more than 106.000 detained and nearly 53.000 jailed over alleged links to the Gülen movement, despite the fact that followers of the movement and Fethullan Gülen, a US-based Turkish Islamic scholar whose views inspired the movement, have repeatedly denied any involvement in the failed coup.