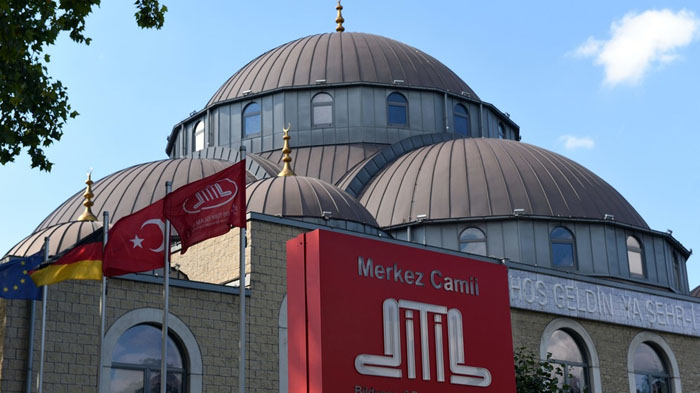 The Cologne-based Turkish-Islamic Union for Religious Affairs (DİTİB) has been ”honored” with the Big Brother Award 2017 in the category of politics for its spying on critics of President Recep Tayyip Erdoğan, in particular followers of the Gülen movement.

“The imitators working at DİTİB for the Turkish authorities and for the MİT intelligence agency to spy on their members and visitors, and to have thus handed them over to persecution by Turkish state authorities” has brought the not-so-coveted award to the union.

The Big Brother Awards have since 2000 been bestowed by digital rights organization Digitalcourage on companies, organizations and individuals in Germany “who act in a prominent and sustained way to invade people’s privacy or leak (personal) data to third parties,” according to the group’s website.

Last week, based on statements by officials to German public broadcaster WDR, it was reported that 10 of 16 imams who were accused of spying for the Turkish government on Gülen movement followers in Germany are currently at large.

According to the report, 10 imams who work for DİTİB have fled the country to avoid legal proceedings.

A total of 20 Turkish citizens are facing an investigation on charges of spying on followers of the faith-based Gülen movement, according to a report in the German Die Welt daily last month.

Tensions rose between Turkey and Germany over operations against DİTİB imams who were claimed to be spying on people affiliated with the Gülen movement, which the Turkish government accuses of masterminding a failed coup attempt in Turkey on July 15, an accusation strongly denied by the movement.

In February, the coordinator of DİTİB, Murat Kayman, announced his resignation over the allegations.

In the same month, German police teams raided the apartments of four DİTİB imams in North Rhine-Westphalia and Rhineland-Palatinate who were suspected of acting as informants.

The Federal Public Prosecutor’s Office (GBA) said in a statement that the imams had acted on an order issued on Sept. 20 of last year by the directorate to profile Gülen movement sympathizers.

In March, GBA launched an investigation into Halife Keskin, the foreign relations general manager of Turkey’s Religious Affairs Directorate (Diyanet), over his order to Turkey’s diplomatic missions and imams to gather information on people sympathetic to the Gülen movement.

It was also leaked to the public that not only imams but also members of Turkey’s National Intelligence Organization (MİT) had been surveilling members of the Gülen movement in Germany.

The German Interior Ministry in March launched an investigation into whether MİT has been spying on suspected supporters of the Gülen movement in Germany.

Speaking in Passau in southern Germany in March, German Interior Minister Thomas de Maizière said it was a “criminal offense” to carry out espionage activities on German soil and that they “will not be tolerated by us.”

“That applies to all foreign states and all intelligence services,” he added.

“We have repeatedly told Turkey that something like this is unacceptable. No matter what position someone may have on the Gülen movement, here German jurisdiction applies and citizens will not be spied on by foreign countries,” he said.

According to reports in the German media, the head of Turkey’s MİT, Hakan Fidan, handed Bruno Kahl, the head of Germany’s Federal Intelligence Service (BND), a list of 300 individuals and 200 organizations allegedly linked to the Gülen movement at a security conference in Munich in February, aiming to persuade German authorities to help Turkey.

However, German authorities have informed Turks linked with the Gülen movement about MİT surveillance in Germany.

Commenting to BBC on the issue in March, Hans-Georg Maassen, the head of the German Federal Office for the Protection of the Constitution (Bundesamt fuer Verfassungsschutz), said, “Outside Turkey I don’t think anyone believes that the Gülen movement was behind the attempted putsch.”

“At any rate I don’t know anyone outside Turkey who has been convinced by the Turkish government,” he added. (Turkey Purge with TM)