Erdoğan will meet with Putin, Trump in May 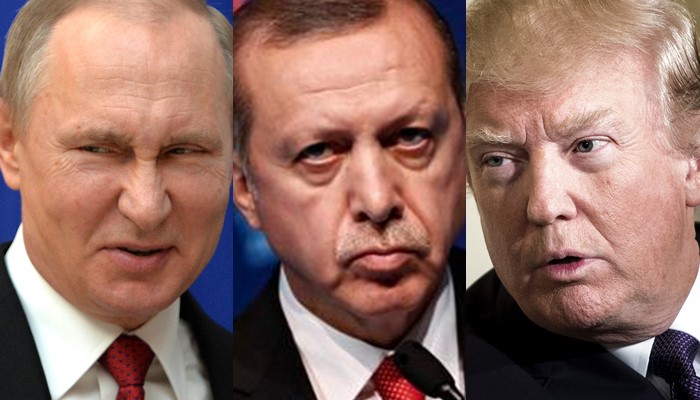 Amid a political crisis concerning opposition claims of fraud in a Sunday referendum, President Recep Tayyip Erdoğan is preparing to meet in May with Russian President Vladimir Putin and US President Donald Trump, Cumhuriyet reported on Thursday.

According to the report, Erdoğan will meet with Putin on May 3, and the Turkish president said his first face-to-face meeting with Trump would take place on May 16 or 17.

Foreign Minister Mevlüt Çavuşoğlu had said at a press conference on Wednesday that the two leaders would meet ahead of a May 25 NATO summit in Brussels.

On April 17, Trump made a congratulatory phone call to Erdoğan following the disputed referendum on constitutional amendments that introduce an executive presidency in Turkey.

White House Principal Deputy Press Secretary Sarah Sanders told reporters that the conversation between the US president and Erdoğan did not indicate any acceptance of the results of the controversial referendum.

The Organization for Security and Co-operation in Europe (OSCE) said on Monday that Turkey’s referendum lacked equal opportunities, media coverage for the contesting sides and international standards for a fair election.

Erdoğan on Monday slammed the OSCE statement and said Turkey would not recognize a report on the referendum from the organization.

While the US State Department said on Monday it had taken note of concerns expressed by the OSCE regarding the referendum, the European Union called for an investigation into alleged irregularities during the vote.

The constitutional reform package that introduces an executive presidency in Turkey received 51.4 percent of the vote in favor in the referendum, but some opposition parties have contested the results due to the use of unstamped ballots.

Late on Sunday, the Supreme Election Board (YSK) had issued instructions that significantly changed the ballot validity criteria and said the unstamped ballots were valid.