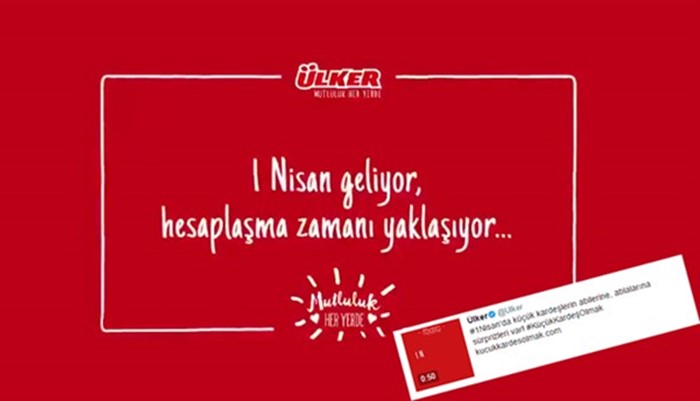 The İstanbul Prosecutor’s Office has launched an investigation into Turkey’s largest food producer, Ülker, over a TV commercial that was perceived as a second coup attempt message by supporters of President Recep Tayyip Erdoğan, ruling Justice and Development Party (AKP) deputy Metin Külünk said in a Twitter message early on Saturday.

“The İstanbul Prosecutor’s Office has launched an investigation because of the commercial,” said Külünk in his tweet.

Based on the notion of April Fool’s Day with a message of “It’s settlement time,” the ad contains cartoon images of jokes that children play on each other on April 1.

After a campaign by Erdoğan supporters on social media claiming that the commercial was referring to another coup attempt as “settlement day,” owner Murat Ülker made a statement on Twitter, describing the situation as a “plot.”

Food giant Yıldız Holding, which is famous for its Ülker brand in Turkey, is better known outside the country for Godiva chocolates and McVities’ biscuits, announced on Dec. 24, 2016 that it had sold a $400 million stake in biscuit maker Ülker to a wholly owned unit based in London.

The sale of 21 percent of Ülker to Pladis Foods Limited for $398 million, leaving Yıldız with a 28.92 percent stake, took place a month after Yıldız Holding was hit by fears that the holding could be targeted in a government crackdown on businesses alleged to have links with Muslim cleric Fethullah Gülen.

In November, Yıldız Holding denied media reports that the group was caught up in the government’s widening post-coup crackdown against the Gülen movement.

An article in the pro-Erdoğan Sabah newspaper claimed that an unnamed company of a popular group has links to Kaynak Holding, another giant that the Turkish government previously seized as part of its war against the Gülen movement, a civic initiative based in Turkey.

The online news platform OdaTV had said the group in question was Yıldız Holding. Yıldız had dismissed the claims, saying that it has nothing to do with the issue reported in the OdaTV article.

Owner Murat Ülker even tweeted in a bid to reassure investors that the article was ill intentioned. “They are making a fuss about nothing. … Our operation is clean, and we will continue working,” he had said.

Since the Turkish government pinned the blame for a July 15 coup attempt on the Gülen movement, a huge blow has been dealt to the private sector. A total of 527 companies have been transferred to the state-run Savings Deposit Insurance Fund (TMSF), while the assets of dozens of businessmen have been confiscated since then.

Minister for Environment and Urbanization Mehmet Özhaseki said on Sept. 1 that some TL 12 billion (about $4 billion) in property had been transferred to the Treasury as part of an investigation into the movement.

The companies are alleged to be connected to the Gülen movement, with the government coining the term “FETÖ” to designate the movement as a terrorist organization despite the lack of any court verdict to that effect.

The total turnover of companies seized by the government has been estimated at over $50 billion, the Cumhuriyet daily reported on Oct. 15.

Among the large conglomerates that have been confiscated by the TMSF are Koza-İpek Holding, Boydak Holding, Dumankaya Holding, Kaynak Holding and Naksan Holding.