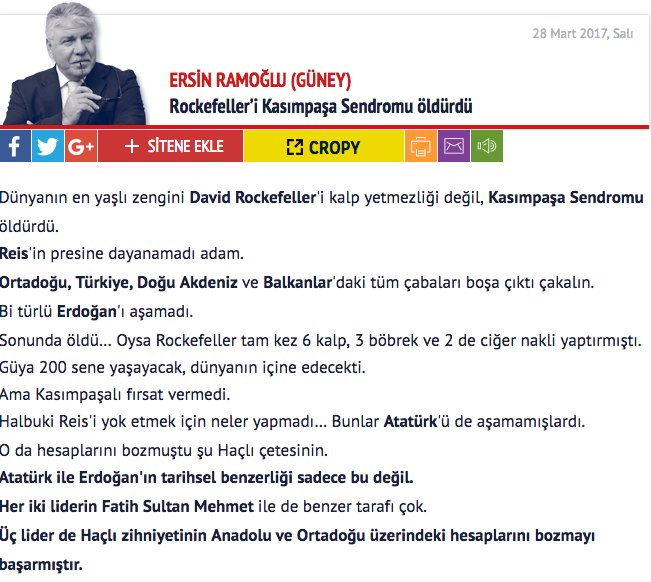 Ersin Ramoğlu, a columnist for the staunchly pro-Erdoğan Sabah daily wrote on Monday that wealthy American banker David Rockefeller, who recently passed away at the age of 101, died because he could not cope with the challenge of President Recep Tayyip Erdoğan.

“David Rockefeller, the oldest, richest man in the world, died not from coronary failure, but due to Kasımpaşa [President Erdoğan’s neighborhood in İstanbul] syndrome,” Ramoğlu wrote while praising Erdoğan’s leadership.

Calling Rockefeller a jackal, Ramoğlu said he could not stand the pressure of the “chief” (Erdoğan) because Erdoğan spoiled all of Rockefeller’s plans in the Middle East, eastern Mediterranean, the Balkans and Turkey.

Claiming that Rockefeller tried all tactics to get rid of Erdoğan, Ramoğlu further said that “those Crusader gangs” could not manage to defeat Atatürk, the founder of modern Turkey, either, likening Erdoğan to Atatürk.