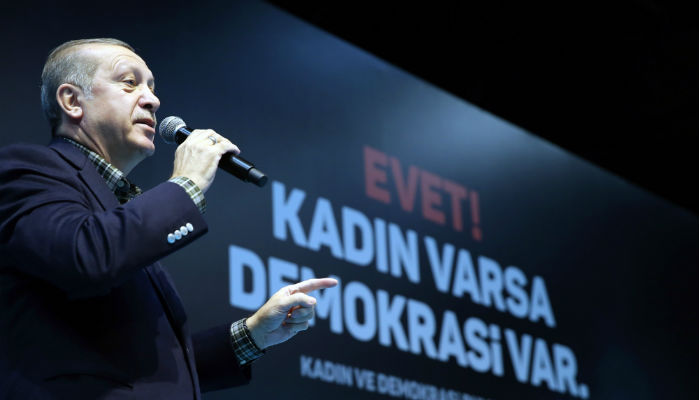 President Recep Tayyip Erdoğan has accused Germany of employing practices similar to those of the Nazi era by refusing to allow two Turkish ministers to deliver speeches in the country in support of a constitutional reform package that will be put to a public vote on April 16.

German authorities last week did not allow Turkish Justice Minister Bekir Bozdağ and Economy Minister Nihat Zeybekçi to deliver speeches in some German towns during which the ministers would ask for support from Turkish expatriates for the reforms, which will introduce an executive presidency and further strengthen Erdoğan.

Speaking at a meeting at İstanbul Abdi İpekçi Sports Hall on Sunday, Erdoğan said: “Oh Germany, you have nothing to do with democracy. Your practices are no different than the Nazi practices of the past. You give us a lesson in democracy but you don’t allow Turkish ministers to speak there. We will mention this in international settings and make you ashamed in front of the world. We don’t want to see that Nazi Germany. We thought it was high time Germany abandoned such practices, but we were mistaken.”

Over 3 million people of Turkish descent live in Germany. Nearly 1.4 million of them are eligible to vote in Turkish elections and referenda.