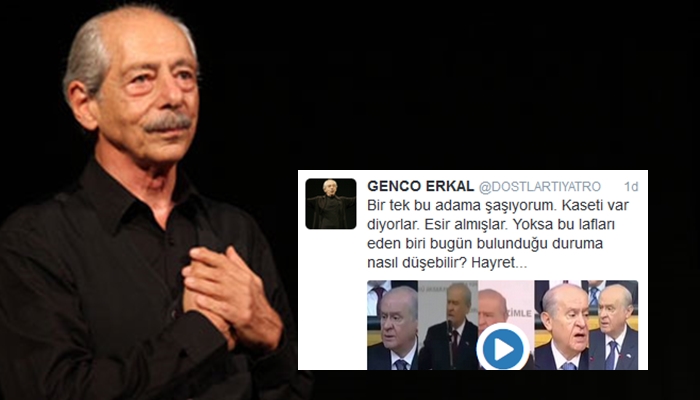 As many wonder why opposition Nationalist Movement Party (MHP) Chairman Devlet Bahçeli has lent support to President Recep Tayyip Erdoğan in his efforts to bring an executive presidency to Turkey, a veteran actor critical of the government has mentioned rumors of a possible sex tape being used as a weapon against Bahçeli.

In a tweet on Monday Genco Erkal wrote in reference to the MHP leader: “This guy surprises me. They say there is a sex tape about him. He is taken hostage. Otherwise, how could someone contradict himself this much?”

Erkal is among many who are fearful of the establishment of one-man rule with proposed amendments to the constitution.

A joint proposal that aims to expand the president’s powers to an unprecedented degree was presented to Parliament by the ruling Justice and Development Party (AKP) and the MHP.
Bahçeli had strongly denied claims that he would support an executive presidency and was opposed to the idea of a change in the system of governance in Turkey. Yet, the AKP’s proposal was only made possible with the support of the MHP.