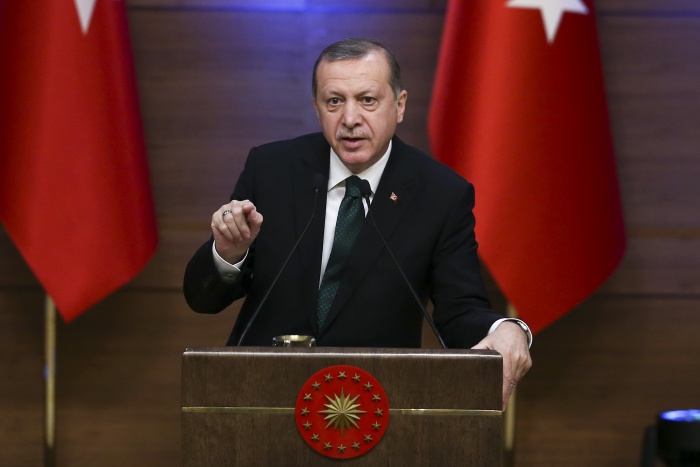 Despite unequivocal denials from US authorities, President Recep Tayyip Erdoğan renewed his claim on Thursday that the United States supports terrorist organizations in the region, in reference to Syria and Iraq.

Speaking at the Scientific and Technological Research Council of Turkey (TÜBİTAK) science awards ceremony in Ankara, Erdoğan said: “As Turkey, we have been calling on Western countries not to make any distinction among terrorist organizations. However, some countries, primarily the United States, have been supporting terrorist organizations that massacre the innocent in the region. When we say this, they are disturbed and through the media say ‘Don’t insult us [by saying such things]’.”

The US Embassy in Ankara issued a statement on Wednesday slamming reports in the Turkish media that accuse the US of supporting the Islamic State in Iraq and the Levant (ISIL) and other terrorist groups in line with claims made by Erdoğan.

The statement, which said there is considerable misinformation circulating in the Turkish media concerning US and coalition operations against ISIL in Syria, unequivocally stated that the US has never supported ISIL, or DAESH, as alleged by the Turkish president and the media.

The announcement followed remarks on Tuesday by US State Department Deputy Spokesperson Mark Toner in which he called Erdoğan’s accusations “ludicrous.”

The embassy in Ankara said the US government did not create or support DAESH or provide weapons or explosives to the People’s Protection Units (YPG) or the Kurdistan Workers’ Party (PKK) – “period.”

In reaction to this statement issued on Wednesday, Turkey’s minister of foreign affairs, Mevlüt Çavuşoğlu said: “The US has provided weapons to YPG. Period.”

A few hours after Erdoğan accused the US and the Global Coalition to Counter ISIL of supporting terrorist groups including ISIL, Toner had said that “it’s ludicrous, to be honest. No basis for truth, as you can all imagine. I don’t think anyone could look at our actions on the ground leading the coalition in northern Syria, in Iraq, and say anything other than that we’re 100 percent behind the defeat, destruction of DAESH,” during the daily press briefing at the Department of State.

“They were accusing us of supporting Daesh [ISIL]. Now they have all disappeared. To the contrary, they give support to terrorist organizations, including Daesh, the PYD, the YPG. All are explicit. We have registered documents of everything with photographs and videos,” said Erdoğan during a joint press conference with Guinea’s President Alpha Cond in Ankara.

Criticizing the coalition forces for failing to keep promises they made about helping Turkey fight against ISIL in Syria, Erdoğan said: “Either they support us or they don’t, but we will continue on our path decisively. We will not deviate from that path.”

“Either way, we will fulfill our duty. We have given martyrs, and that hurt us, but we will not be back again.”

With the death of two more soldiers injured in an attack on Wednesday carried out by ISIL in Syria’s al-Bab region, the number of Turkish soldiers killed during Turkey’s Operation Euphrates Shield, which began in August, has increased to 40.