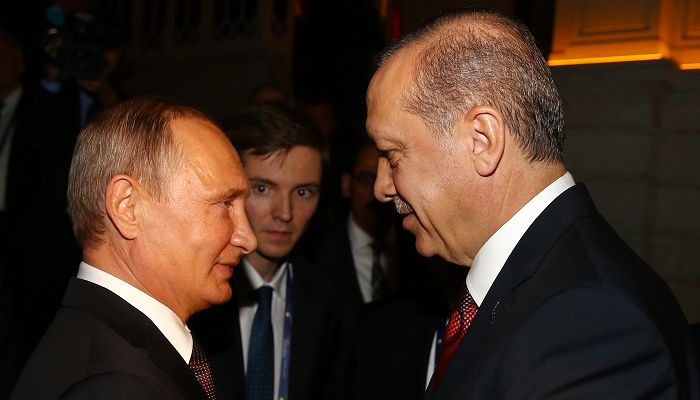 Turkish President Recep Tayyip Erdoğan and his Russian counterpart, Vladimir Putin, discussed the conflict in Syria and attacks on Turkish troops there in a phone call on Friday, Turkish Presidency sources said.

According to a statement from the president’s office, Erdoğan told Putin that Turkey respected Syria’s territorial integrity and that an incursion launched in August to drive Islamic State in Iraq and the Levant (ISIL) militants from the border is evidence of Ankara’s determination in fighting militant groups.

The Kremlin said the discussion on Syria was constructive and that both sides agreed to continue active dialogue to coordinate efforts against international terrorism.

Three Turkish soldiers were killed and 10 were wounded near the Syrian city of al-Bab on Thursday in an airstrike believed to have been carried out by Syrian government forces, the Turkish military said. Russia is among the main backers of Syrian President Bashar al-Assad.

The Turkish Presidency said both leaders also agreed to try to resolve the humanitarian crisis in Aleppo, where a government siege of the rebel-held east part of the city, aggravated by renewed, frequent air strikes on hospitals in the past week, have left residents desperately short of medicine, food and fuel.

Rebel groups in east Aleppo have agreed to a UN plan for aid delivery and medical evacuations, but the United Nations is awaiting a green light from Russia and the Syrian government, the UN said on Thursday.

The killing of the Turkish soldiers on Thursday – the first anniversary of Turkey’s downing of a Russian jet over Syria – raised fears of an escalation in an already complex battlefield. Ankara and Moscow only restored ties, which had been damaged by the jet incident, in August.

The latest casualties bring the number of Turkish soldiers killed in Syria to 17 since Ankara launched an incursion three months ago to try to push ISIL and Kurdish fighters from Syrian territory along its border.