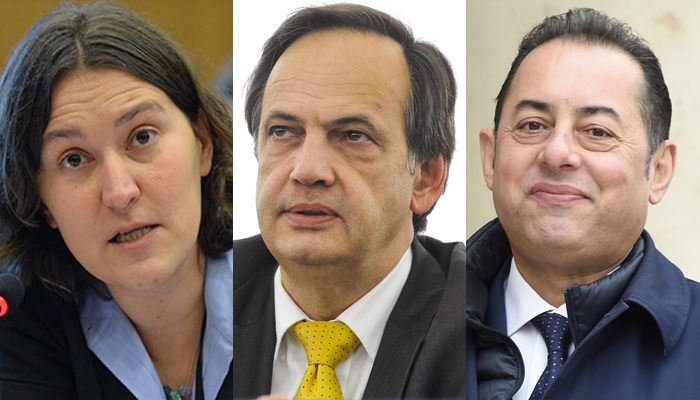 Some members of the European Parliament from the Socialists and Democrats Group (S&D), which on Thursday voted in favor of a non-binding resolution seeking to suspend Turkey’s EU membership talks, have said a lack of democracy and the rule of law in Turkey are responsible for the result of the vote.

A total of 479 EP members voted in favor of imposing a “temporary freeze” on the talks with Turkey while 37 deputies voted against the resolution at a session in Strasbourg.

S&D MEP and EP rapporteur on Turkey Kati Piri said in a press statement on Thursday: “Unfortunately, the situation leaves us with no other choice than to call for the temporary freeze of the talks. This doesn’t mean we should stop our dialogue, but we have come to a point where a meaningful negotiation on EU-integration is currently not credible.”

Kiri said the EU is not abandoning Turkish citizens and their door remains open. “We are merely reacting to what’s happening in a country that aspires to join the EU. We expect the same from the EU-leaders in December,” she added.

Since a failed military coup attempt on July 15, more than 115,000 people — including soldiers, academics, judges, journalists and Kurdish leaders — have been detained or dismissed over their alleged backing for the putsch, in what opponents, rights groups and some Western allies say is an attempt to crush all dissent.

According to S&D President Gianni Pittella, the disproportionate and repressive measures taken by Turkish President Recep Tayyip Erdoğan forced them to urge the EU Commission and EU Council to temporary freeze the accession talks with Turkey because they can no longer remain silent in the face of Erdoğan’s outrages and the obvious breaches of the rule of law and human rights in Turkey.

“This resolution is a clear political message to Erdoğan that should not be misinterpreted: We want Turkey to be anchored to Europe, to democracy and to the rule of law. We take our values seriously and therefore we cannot continue as if nothing happened in Turkey. We hope for the rule of law and human rights to be restored sooner rather than later. Until then, we will continue our dialogue but freeze the accession talks,” noted Pittella.

Turkey’s EU accession talks began in 2005, but only one of the 35 policy areas – called “chapters” – has been closed. A country is only ready to join the EU when it has met the criteria in all 35 chapters.

S&D vice-chair for foreign affairs, neighborhood policy and enlargement Knut Fleckenstein also released a press statement on Thursday in which he said Turkey is, and will remain, one of “our most important partners” as a NATO member and as a candidate for EU membership, but the country’s chances of advancing in the accession process requires the full respect by the Turkish authorities of all the Copenhagen criteria.

“Once again we underline that human rights and the rule of law in Turkey must be upheld and the principles of the European Convention on Human Rights fully respected.”