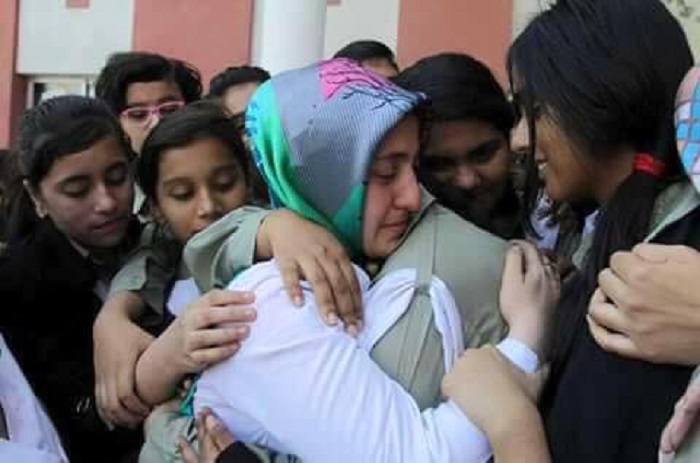 The private PakTurk International Schools and Colleges bade farewell in several branches across Pakistan where students and parents wept over the deportation of Turkish teachers who were recently ordered by the Pakistani government to leave the country by Nov. 20.

On Tuesday the Pakistani government ordered teachers who work at 23 schools affiliated with the Gülen movement in the country to leave Pakistan by Nov. 20.

A total of 130 teachers are working at Gülen-affiliated schools in Pakistan, which operate under the name of PakTurk International Schools and Colleges. They have been ordered to leave the country with their families, numbering 450 people in total.

The protests over the Turkish teachers’ deportation went viral on social media, making the SaveTurkTeachers hashtag the top trend on Twitter on Friday night.

The decision of the Pakistani government, which was announced by the country’s Interior Minister Chaudhry Nisar Ali Khan during a live TV program, attracted criticism from some in Pakistan as well as outside the country who said it was unfair to bow to Turkish government pressure and deport Turkish teachers who have taught Pakistani children for years.

Pakistan’s decision to deport dozens of Turkish teachers was “politically-motivated,” Amnesty International said. The move has sparked small demonstrations in the major cities of Pakistan.

Despite Turkish Islamic scholar Fethullah Gülen, whose views inspired the Gülen movement, and the movement having denied the accusation, Turkish President Recep Tayyip Erdoğan — calling the coup attempt “a gift from God” — and the government launched a widespread purge aimed at cleansing sympathizers of the movement from within state institutions, dehumanizing its popular figures and putting them in custody.

About 110,000 people have been purged from state bodies, in excess of 80,000 detained and over 36,000 have been arrested since the coup attempt. Arrestees include journalists, judges, prosecutors, police and military officers, academics, governors and even a comedian. Critics argue that lists of Gülen sympathizers were drawn up prior to the coup attempt.