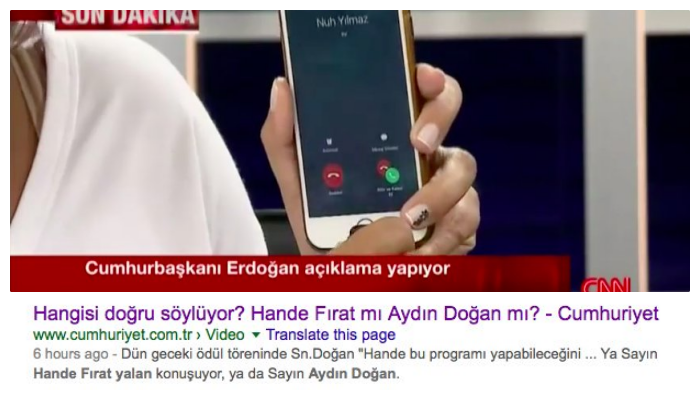 Although several mysteries remain regarding the facts of a coup attempt in Turkey on July 15, the critical Cumhuriyet daily has deleted a story questioning controversial remarks made by the owner by CNNTürk and a TV host who aired a FaceTime call from President Recep Tayyip Erdoğan on the night of the coup.

On the evening of July 15 President Erdoğan connected to one of the most highly watched news channels in the country, CNNTürk, via FaceTime on the show of host and journalist Hande Fırat. Thanks to this Facetime call, Erdoğan was able to mobilize the people against the putschists on the night of the attempt.

Fırat had stated that Erdoğan’s call was spontaneous. However, later on, during a ceremony on Nov. 13 in which Fırat received an award for this particular story, the owner of CNNTürk and the Doğan Media Group, Aydın Doğan, said Fırat told him about the possibility of a connection with the president on the night of the coup. In response, Doğan told Fırat that if she could manage it on live TV, he would reward her journalistic success by paying her wedding reception costs and would buy her an apartment.

The Cumhuriyet daily on Monday ran a story directing attention to the controversial remarks by Doğan and Fırat and asking who was lying about the details of that FaceTime call. However, hours later, Cumhuriyet deleted the story from its news portal. The link of the story remains, but it was not able to be viewed as of Monday night.

Turkey observers on social media wonder why a critical daily such as Cumhuriyet deleted such an important story that would have revealed the facts behind the coup of July 15.

Meanwhile, reporter Emre Erciş asked Fırat about this controversy from his Twitter account. He questioned the connection between the FaceTime call and Nuh Yılmaz, the media coordinator of the National Intelligence Organization (MİT) who also called Fırat on live TV on July 15.

On the night of the coup nearly 250 people died and thousands were injured when people took to the streets following Erdoğan’s call to resist.

Only hours after the coup attempt, Erdoğan had called the failed coup a ¨great gift of God“ and launched the most massive purge of modern Turkish history against critics, particularly the Gülen movement.