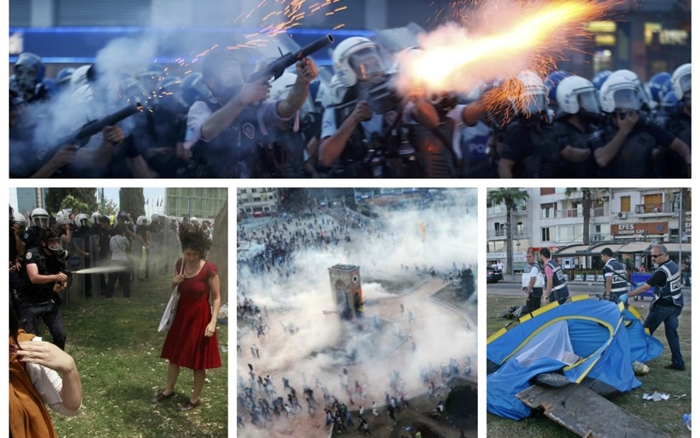 In yet another example of scapegoating the Gülen movement for any wrongdoing in Turkey or in anywhere else in the world, ruling Justice and Development Party (AKP) Deputy Chairman and Istanbul deputy Mustafa Ataş has said FETÖ was responsible for the harsh police reaction to protesters in the Gezi demonstrations of 2013.

“Do you remember how people were provoked when police officers set fire to tents in Gezi Park and fired water cannons at them, right? Now, we can see more clearly that those provocateurs were all affiliated with FETÖ,” Ataş said.

“FETÖ” is an abbreviation for the Fethullahist Terrorist Organization, coined by the Turkish government to label the movement as a terrorist organization. The government accuses the movement of masterminding a July 15 coup attempt in Turkey.

However, Ataş also said it was FETÖ that planned all the protests in Gezi park.

Accusing the movement of anything bad is nothing new in Turkey as top state officials as well as criminals and suspects also pin the blame on the movement for crimes, negligence and sometimes wrongdoing.

Last week, President Erdoğan’s chief advisor Yiğit Bulut hinted at connections between FETÖ and the 9/11 terrorist attacks in the US.

In mid-October, the infamous police officer who sprayed tear gas directly into the face of a female protestor during Gezi demonstrations, for which he received a suspended 20-month jail sentence, blamed his superior, whom he considers to be affiliated with the movement.

Earlier, Soma Holding Chairman Can Gürkan said Turkey’s worst mining accident that killed 301 people at his mine was a plot by the movement.

Sentenced to 19 years in prison for his ex-wife’s murder, Turkey’s infamous mob boss Alaattin Çakıcı earlier claimed that judges and prosecutors affiliated with the movement blocked a fair trial in his case.

In late September, a report the Ankara Chief Public Prosecutor’s Office attached to its investigation into the movement stated that the removal of talented pilots from within the military and FETÖ’s ensuing infiltration has increased the occurrence of crashes.