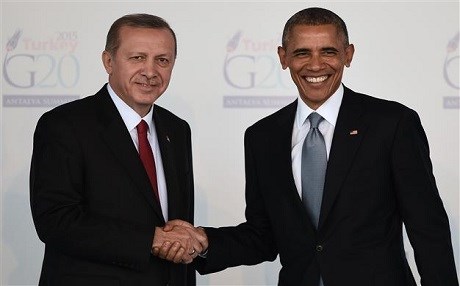 US President Barack Obama told his Turkish counterpart, Recep Tayyip Erdoğan, that it is critical to “finish the job” to secure Turkey’s border with Syria over which Islamic State in Iraq and the Levant (ISIL) militants cross at will, foreign recruits move into Syria and militants enter Turkey as a gateway to Europe.

The two leaders had a private 45-minute meeting on Sunday on the sidelines of the G20 summit in Hangzhou, China, and held a brief press conference afterwards.

The Turkish army crossed the border into Syria in late August at Jarabulus, on the banks of the Euphrates, and on Saturday they crossed further west, at al Rai, opening a new front. Turkish security forces are supporting the Free Syrian Army (FSA) in the fight against ISIL in the border regions. It has also clashed with the Kurdish-led Syrian Democratic Forces (SDF). Ankara insists that no Kurdish forces should be permitted in the area.

In the leaders’ meeting on Sunday, Erdoğan insisted that the US and Turkey must present a common front against terrorism and that there should be no distinction between “good terrorists” and bad terrorists. All terrorism is bad, he said.

Turkey objects to US support for Kurdish fighters in northern Syria. Washington sees the Kurdish People’s Protection Units (YPG) as a key ally in the fight against ISIL while Ankara considers the YPG a branch of the terrorist Kurdistan Workers’ Party (PKK).

In their meeting Obama also assured Erdoğan that the US will work with Turkey to ensure that those responsible for an attempted coup in Turkey in July are brought to justice. Their meeting was the first since the July 15 failed coup.