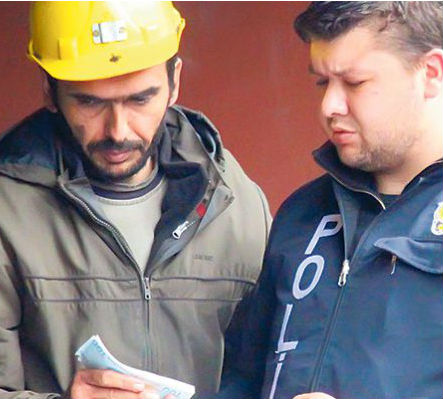 A group of miners, who had been pursuing a hunger strike inside a coal mine for 11 days due to unpaid wages following the government take-over of their employer company in the northern province of Zonguldak, put an end to their protest on Sunday, after they received part of their wages.

Zonguldak Police Chief Osman Ak went to the mine on Sunday and persuaded the 17 hunger strikers to come out. Outside the mine, they were handed social welfare payments, as well as part of their total wages, which is TL 1,750 for each.

The miners first waved to their loved ones who were waiting for them outside the mine and went through medical examination by the paramedics standing by at the scene. Then the miners and their families were taken to a restaurant at a police facility for lunch.

The Deka mining company and its sub-entity Balçın mining, which are based in the Kilimli district of Zonguldak, were confiscated by the government four months ago as part of an investigation into the so called “Parallel State Structure.” The term was coined by the Turkish government and is currently used by the government-backed judiciary to frame sympathizers of the Gülen movement, a grassroots social initiative inspired by Turkish Islamic scholar Fethullah Gülen.

The Deka mining company is one of the dozens of institutions recently seized by the government via court rulings on the grounds that they have links to the Gülen movement. On May 19, a total of 85 miners, who work at the company, went on a hunger strike inside the coal mine stating that their wages have not been paid since the government take-over. In the following days, a number of the hunger strikers were forced to quit due to health problems. Remaining 17 miners entered the eighth day of their hunger strike on Sunday.

President Recep Tayyip Erdoğan, who was the prime minister at the time, accuses the Gülen movement of being behind the Dec. 17, 2013 corruption and bribery investigation that implicated his ministers and close circle. The major scandal led to the resignation of four Cabinet ministers, however, the investigation was dropped after dismissal and imprisonment of the prosecutors who oversaw the case. Erdoğan accused the Gülen movement of “attempting a coup” and launched a witch hunt against the sympathizers of the movement by jailing thousands of prosecutors, judges, police chiefs and teachers. The Gülen movement denies the allegations.