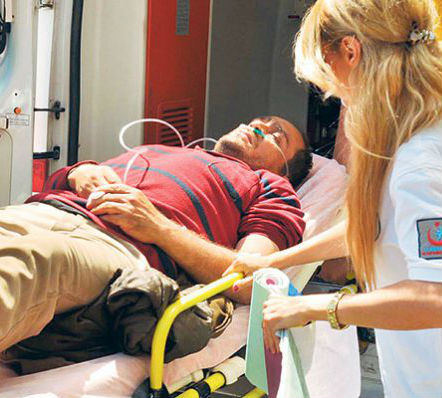 A total of 29 miners have been continuing their hunger strike underground in the northern province of Zonguldak since May 19, after a mining company was seized by the government and recently appointed trustees stopped paying the miners’ wages four months ago.

As the hunger strike entered its ninth day, 56 out of the 85 miners who started the strike were forced to quit after experiencing health problems in the following days. Remaining 29 miners seem to be determined to follow through until they receive their due payments.
Turkish Confederation of Revolutionary Worker Unions (DİSK) issued a statement in response to the situation of nearly 250 miners in Kilimli, Zonguldak, whose wages have not been paid over the past four months.

DİSK’s statement said “Miners of the company, which was taken over under the pretext of operation [against the Gülen movement], are not being paid their earned wages, in violation of the law. The pursuit of their rights that is ongoing under difficult working conditions depicts the darkest aspects of the government’s view of labor.”

According to the statement, the miners have been staying inside the mine, exposed to methane and and coal dust, while their families and loved ones have been waiting outside the mine.

Zonguldak Governor Ali Kaban delivered a statement saying that part of the due wages will be paid to the miners after the produced coal stocks are sold.

In the meantime, a group of deputies from the main opposition Republican People’s Party (CHP) led by CHP Deputy Chairman Veli Ağbaba attempted to visit the miners on hunger strike. However, the group was blocked by police.