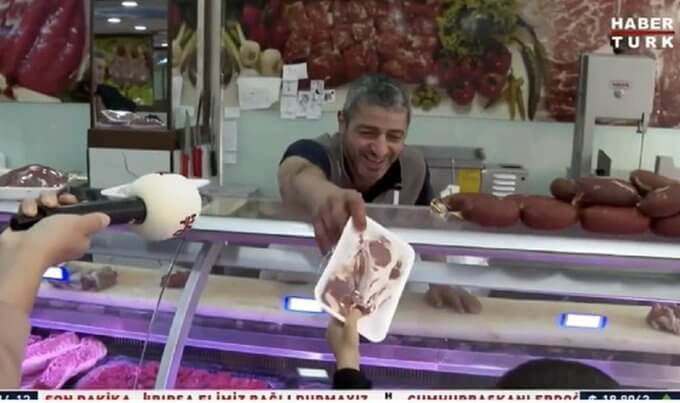 The pro-government Habertürk TV has fired a reporter who recently reported on a young boy who said his mother bought him “meat” as a present for good marks on his report card, local media reported on Tuesday, citing a written statement by the station.

In the news story last week, a video of which was widely circulated on social media, the boy tells Fatmanur Boylu, the reporter, that his mother bought him “meat” to celebrate the high grades on his report card for the semester.

As the scene unfolds, the butcher is also seen handing three lamb chops to the boy.

The video drew mixed comments on social media, with some users lamenting the economic hardship many families are suffering in Turkey, where a staggeringly high cost of living has become the new normal, and others claiming the news story was the result of a perception management operation.

Habertürk TV said on Tuesday they fired Boylu for making “a dictating and guiding preliminary speech” with the child speaking in the news, which they found to be “completely against professional ethics.”

The TV station added that they carried out an investigation, examined the raw footage of the news and took the reporter’s statement on the issue.

Habertürk TV further said they didn’t find Boylu’s statement, in which she said she saw the child by chance at the store with his parents and talked to him “to add warmth and joy to the news,” to be “explanatory or convincing.”

The boy’s mother, who spoke to the press after the video went viral, stated that they weren’t a poor family and had their own house and a car.

Turkey has been suffering from a high level inflation which hit 85 percent in late 2022, according to official statistics, which significantly increased the cost of living in the country amid skyrocketing prices.