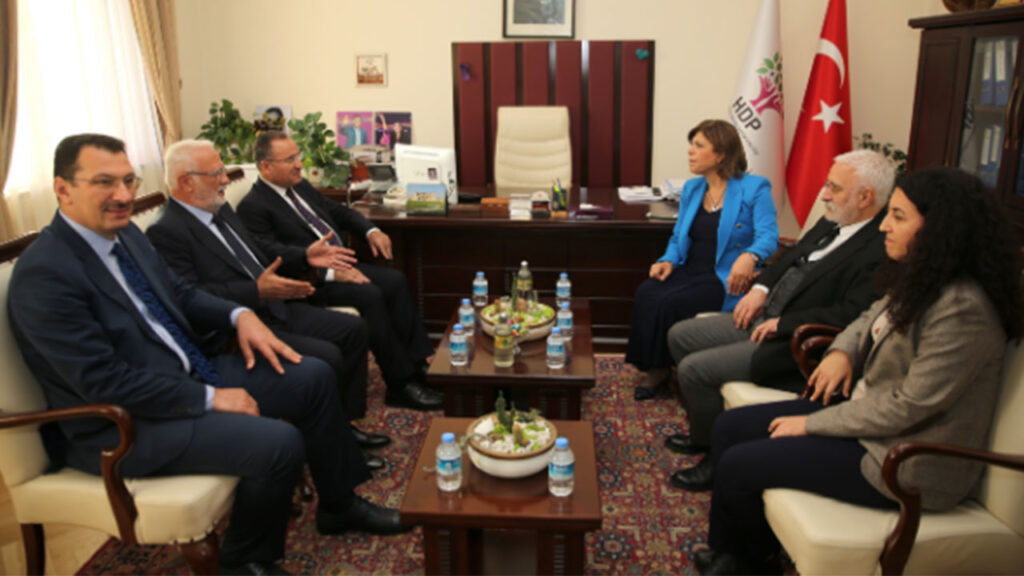 Turkey’s ruling Justice and Development Party (AKP) has been accused of being hypocritical in its attitude towards a pro-Kurdish party that it has long portrayed as the political front of a terrorist organization, after visiting the party’s senior officials to talk about a proposal to hold a referendum on guaranteeing headscarf freedom in Turkey.

The visit raised eyebrows since Erdoğan and the AKP, in addition to their ultranationalist election partner, the Nationalist Movement Party (MHP), accuse the HDP of links to the outlawed Kurdistan Workers’ Party (PKK) and also accuse other opposition parties of collaboration with it from time to time.

The PKK, recognized as a terrorist organization by Turkey and much of the international community, has been waging a bloody campaign in Turkey’s Southeast since 1984.

The HDP currently faces a closure case on charges of “attempting to destroy the indivisibility between the state and the people,” and hundreds of its politicians, including former co-chairs, are behind bars on terrorism charges, while most of the 65 HDP mayors elected in the predominantly Kurdish Southeast in 2019 have been replaced by government-appointed trustees.

Journalist İsmail Saymaz said in his column on the Halk TV news website on Monday that Şamil Tayyar, a member of the AKP’s Central Decision and Executive Board (MKYK), and former party deputy Mehmet Metiner drew attention to the discrepancy in the AKP’s attitude towards the HDP on Twitter, while a senior MHP member told him to wait for the party’s group meeting on Nov. 8, when its leader, Devlet Bahçeli, is expected to slam its election partner for visiting the HDP.

“The AKP must decide: If they see HDP as a party … whose support will be considered important, then they should change their language and approach towards the HDP,” Metiner said in a tweet on Nov. 4.

Quoting Metiner’s tweet, Tayyar commented, “Definitely. The AKP should conduct its relations with the HDP in the same way it views the party.”

Saymaz said he phoned both of the figures and learned that while Metiner holds the view that AKP shouldn’t hold meetings with HDP, Tayyar argues that the HDP, the second-largest opposition party in parliament, shouldn’t be made an enemy.

Main opposition Republican People’s Party (CHP) group deputy chairman Engin Altay also criticized the AKP for the frequent shifts in its stance toward the HDP during a press conference in parliament.

“They call HDP [members] terrorists on every occasion. Then, when there is a need for a constitutional amendment that Erdoğan wants, they go to the HDP as … a legal, official party with a group in the parliament, as we claim it to be. … Make up your mind already,” Altay said, addressing the AKP.

Saymaz’s column also included a brief interview with AKP parliamentary group deputy chairman Bülent Turan, who told him, when he was asked whether AKP’s visit to the HDP contradicts its political stance, that they were negotiating the headscarf freedom issue with all the parties that have a group in parliament and they would be accused of being insincere about the issue if they didn’t meet with officials from the HDP.

The HDP denies links to the PKK and says it is working to achieve a peaceful solution to Turkey’s Kurdish issue and is only coming under attack because of its strong opposition to president Erdoğan’s 19-year rule.

The political and legal assault on the HDP, which intensified after a truce between Kurdish militants and the AKP government broke down in 2015, grew even stronger after Erdoğan survived a coup attempt in July 2016 that was followed by a sweeping political crackdown.