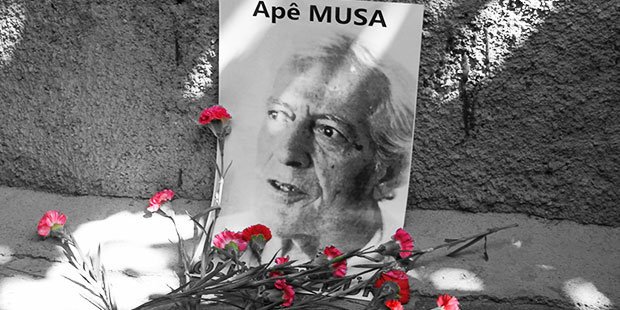 Relatives, lawyers among those detained during protest by Saturday Mothers

Anter and his nephew, journalist-writer Orhan Miroğlu, were attacked in the southeastern province of Diyarbakır on Sept. 20, 1992.

The attack, which was allegedly conducted by the former JİTEM, the Gendarmerie Intelligence and Counterterrorism Unit, killed Anter and seriously injured Miroğlu, currently a member of the ruling Justice and Development Party’s (AKP) Central Decision and Executive Board (MKYK).

The now-defunct JİTEM was accused of involvement in the torture, disappearance and execution of Kurdish politicians and businesspeople during the 1990s, a period of bloody conflict between the Turkish state and Kurdish militants.

Abdulkadir Aygan, one of the defendants in the JİTEM case, previously claimed in a book and in interviews that the person who assassinated Anter was Hamit Yıldırım, who was arrested on June 29, 2012, BBC said.

The indictment demanding aggravated life sentences for Yıldırım, who is accused of being the hitman; Mahmut Yıldırım, known by the code name Yeşil and believed to be a deep state actor; Aygan; and retired colonel Savaş Gevrekçi was accepted on July 5, 2013.

Retired Brig. Gen. Veli Küçük, who is believed to be one of the key figures of the “deep state” that used JİTEM particularly in the 1990s, argued in 2016 as part of the trial that had merged the murder case of Anter and the JİTEM main case in December 2014 that JİTEM did not exist.

The deep state was alleged to be a group of anti-democratic coalitions within the Turkish political system, including high-level figures from the Turkish military, security agencies, judiciary and mafia.

Yıldırım, the sole suspect in the Anter case who was under arrest pending trial, was released on June 28, 2017 on the grounds that his maximum five-year detention had expired.

At the 36th hearing held on Sept. 15, the Ankara 6th High Criminal Court adjourned the trial until Sept. 21, a day after the statute of limitations in the case expired.

The court subsequently dropped the case at the next hearing held on Wednesday.

According to a report by the Evrensel daily, Öztürk Türkdoğan, co-chair of Turkey’s Human Rights Association (İHD) and lawyer for Anter’s son Dicle Anter, stated that the murder case of the Kurdish writer should be evaluated as a war crime, adding that the statute of limitations cannot be applied in such cases.

Türkdoğan also reminded that the European Court of Human Rights (ECtHR) previously found rights violations in the case due to the lack of an effective investigation into the murder.

“The decision in the Musa Anter case came as no surprise. … The court did not have to rule on the statute of limitations because this is … one of the important murders organized by a political [organization] within the state. Therefore, it had to be considered a war crime. This is what universal law requires,” Sancar said.