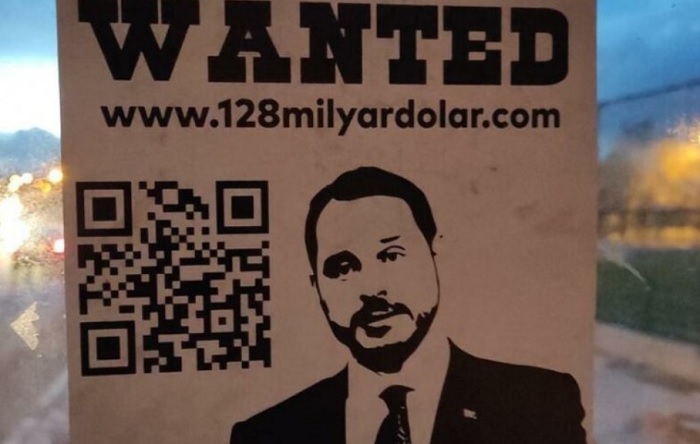 A Turkish appeals court has announced its reasoned decision concerning its upholding last week of a local court’s ruling ordering the main opposition party to pay damages to President Recep Tayyip Erdoğan’s son-in-law and former finance minister Berat Albayrak on the grounds that Albayrak’s personal rights were violated when he was likened to a thief in a video, according to Turkish media.

The İstanbul Anadolu 29th Criminal Court of First Instance had ordered the Republican People’s Party (CHP) to pay the former minister TL 40,000 ($2,331) in damages in March of this year.

The CHP appealed the decision, but it was rejected last week by the regional appeals court in İstanbul, which said in its reasoned decision that the party attacked the personal honor and reputation of Albayrak, under whose watch the country’s forex reserves dropped sharply, by likening him to a thief in a video about $128 billion sold from the central bank’s reserves in 2019-2020.

Released on the CHP’s social media account on Feb. 19, 2021, the video, titled “$128 billion of the central bank is missing, the son-in-law responsible for it is on the run,” shows the figure of a thief escaping with a sack bearing a dollar sign in his hands, following which the sentence “The son-in-law is on the run” appears.

The same sentence is shown again in the video after a male figure in a suit is seen leaving a bank vault with a bag, according to Turkish media reports, which added that the court did not come to any conclusion regarding what happened to the $128 billion in central bank reserves, a question frequently raised by the CHP at the time.

Although Erdoğan and his monetary policymakers had tried to downplay the issue, the public, experts and the opposition parties, especially the CHP, had called on Erdoğan and his Justice and Development Party (AKP) government to explain what happened to the central bank’s $128 billion in foreign reserves.

The CHP turned “Where’s the $128 billion?” into a political slogan after the central bank used vast sums to try and support the lira when it fell to historic lows against the dollar and euro over the past three years.

The unorthodox policy began around the 2019 municipal elections and was ramped up in 2020, when the pandemic exposed the lira’s vulnerability and Turkey’s reliance on external funding.

Albayrak has frequently been blamed for the deterioration of the Turkish economy when a decline in the value of the Turkish lira, nearly 30 percent in 2020 under his ministry, led to higher inflation via imports priced in hard currencies.

The CHP first posed the question “Where’s the $128 billion?” about the sales in February 2021, prompting Erdoğan to defend the legacy of his son-in-law, who had overseen the policy, claiming that a significant part of the forex reserves was used to enable the country to overcome the pandemic with minimal damage.

“They’re hung up on where the money is. The money is in the people’s Treasury and the central bank. Nothing was lost,” Erdoğan also said on March 10, 2021, in reference to the opposition politicians.

However, Erdoğan’s remarks did not reflect the truth, media reports said at the time, since the central bank’s net forex reserves were at their lowest level since 2003 of $10.68 billion as of April 2, according to bank data, and its outstanding swaps stood at $41.116 billion, which meant the reserves were in deeply negative territory once the swaps were deducted.