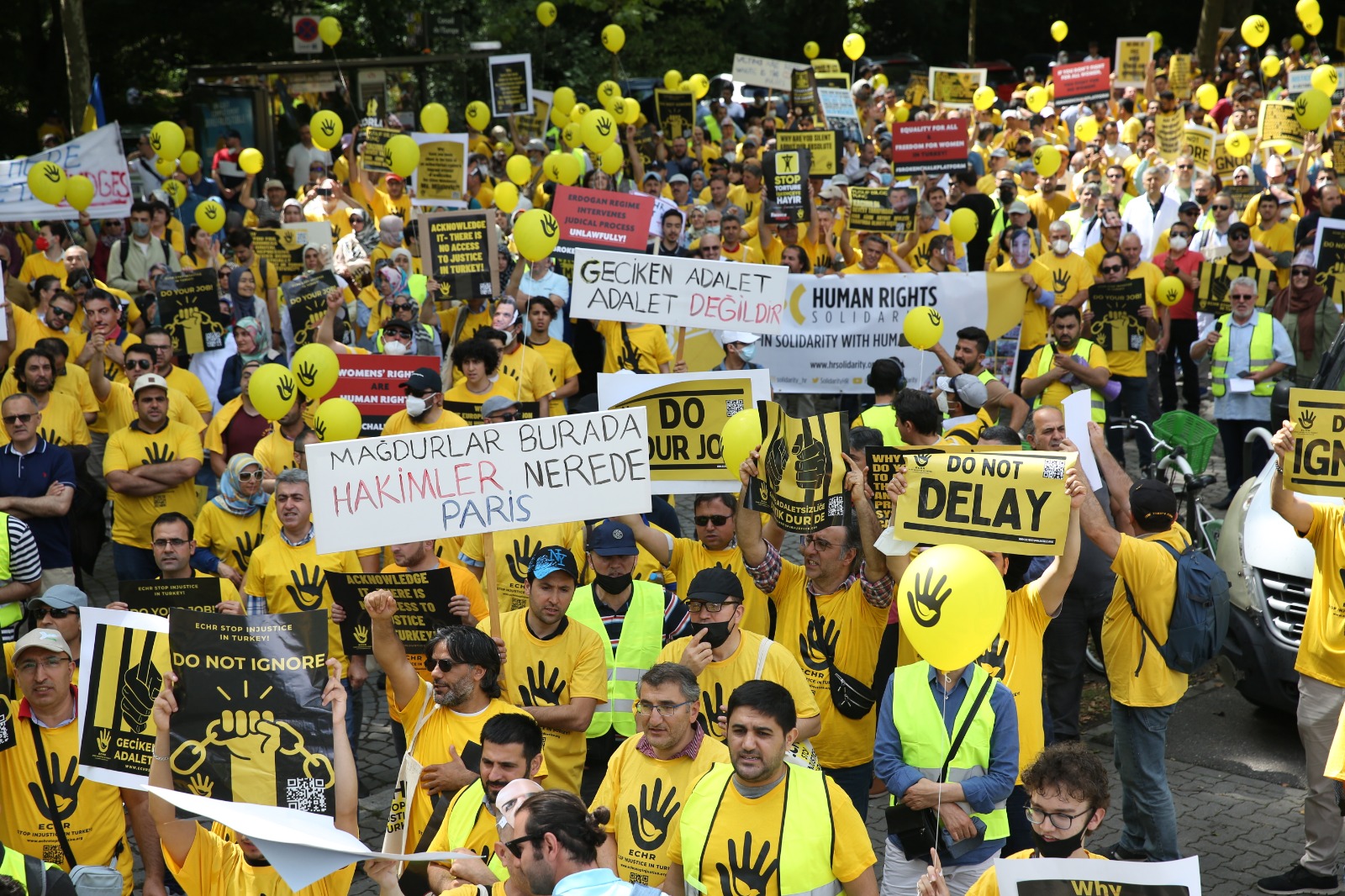 Turkish businesspeople irked over visa-related problems for trips to Europe

Hundreds of activists and victims of Turkey’s post-coup crackdown, joined by former leader of the UK’s Labour Party Jeremy Corbyn and EU parliamentarians, gathered in front of the European Court of Human Rights (ECtHR) in Strasbourg on Friday to protest rights violations in Turkey and ask the ECtHR to take swift action against them.

The top European human rights reviewing body is accused by the victims of human rights violations in Turkey that culminated after an abortive putsch in 2016, when the government launched a crackdown on non-loyalist citizens under the pretext of an anti-coup fight, of not expeditiously processing applications from the victims or of issuing rulings in favor of the Turkish government in some cases.

The platform said in a press release that the ECtHR is turning a blind eye to the human rights violations taking place in Turkey under the rule of President Recep Tayyip Erdoğan.

“The court has had several opportunities to establish the facts regarding gross human rights violations in Turkey and compel the regime to respect the basic tenets of the European Convention on Human Rights. However, it failed in the execution of its duties and displayed incompetence, especially regarding the systematic violations of the rights of a specific group, the Gülen movement. As the victims number in the hundreds of thousands, the violations constitute clear crimes against humanity,” the press release said.

The Turkish government and Erdoğan accuse the Gülen movement, inspired by the views of Turkish cleric Fethullah Gülen, of masterminding the failed coup on July 15, 2016 and has designated the group as a terrorist organization. The movement denies involvement in the coup attempt or any terrorist activity.

The crowd, around 1,500 strong, marched toward the ECtHR building in Strasbourg. They chanted slogans and carried banners that said, “ECtHR, stop injustice in Turkey,” “Justice delayed is justice denied,” “Victims are here, where are the judges?” and “ECtHR, stop the purge in Turkey.”

On behalf of the Peaceful Actions Platform, former Turkish diplomat Rumi Ünal submitted two letters to the Council of Europe (CoE), addressed to CoE Commissioner for Human Rights Dunja Mijatović and CoE Secretary General Marija Pejčinović Burić. Ünal, who is among the more than 130,000 civil servants purged by the Turkish government in the aftermath of the coup attempt, said the letters include complaints about the CoE’s “indifferent” attitude regarding the human rights violations in Turkey as well as the victims’ expectations from the council to speak up for them.

One of the protestors criticized the alleged slowness of the ECtHR in concluding applications with a touch of humor, dressing up as a snail and carrying a banner that read, “Even I am faster than the ECHR.” 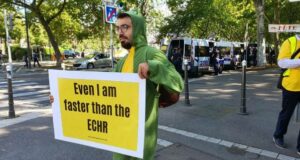 After gathering in front of the ECtHR, victims of Turkey’s post-coup crackdown delivered speeches.

Relatives of victims of alleged enforced disappearances perpetrated by Turkey were among the protestors, and some of them addressed the crowd.

Şefika Nur Kurt, sister of Yusuf Bilge Tunç, a former public servant who went missing in August 2019 and is feared to have been abducted by Turkish intelligence, was the first to speak.

In March the ECtHR rejected an application by Tunç’s family which claimed that Turkish authorities had failed to carry out an effective investigation into his disappearance.

Kurt said Turkey did not conduct an effective investigation and that the ECtHR’s rejection of the application showed her that the injustice of Erdoğan’s Turkey is being perpetuated in Europe.

Following Kurt, Zeynep Kişi, the wife of Zabit Kişi, a former teacher who was abducted from Kazakhstan by Turkish intelligence agency MİT, took the stage and said that during the enforced disappearance of her husband, the ECtHR did not respond to her petitions.

Corbyn spoke following Kişi and emphasized the need to unite in solidarity to demand universal enforcement of human rights.

‘Show that there are judges in Strasbourg’

Şükür and Kanter, who both live outside Turkey, are among the victims of the crackdown on the Gülen movement due to their affiliation with the group and face prison sentences in Turkey on bogus terrorism charges.

In his video message Şükür, who described himself as “one of the victims of the current regime” in Turkey, said he and his family began to be targeted by the Turkish government after he sided with the law and justice against the government’s unlawful actions and were subjected to various acts oppression at the hands of the government.

Şükür said he as well as thousands of others had high expectations from the judges of the ECtHR to “fulfill their duty without delay” and to side with justice.

“Humanity needs this,” he added.

The former football player said Turkey’s failure to comply with ECtHR rulings to release Kurdish politician Selahattin Demirtaş and businessman Osman Kavala from prison show how the country’s judiciary lacks independence and is controlled by the government.

He called on the judges of the ECtHR to help restore the rule of the law in Turkey through their decisions and show the victims that “there are judges in Strasbourg.”

Some of these people had to take illegal and risky journeys in dinghies to Greece because their passports had been revoked by the government.

Share
Facebook
Twitter
Pinterest
WhatsApp
Email
Print
Copy URL
Previous article17 lawyers detained in İstanbul over alleged Gülen links
Next article[ANALYSIS] Why does Erdoğan want to cause a crisis in the Aegean with Greece?