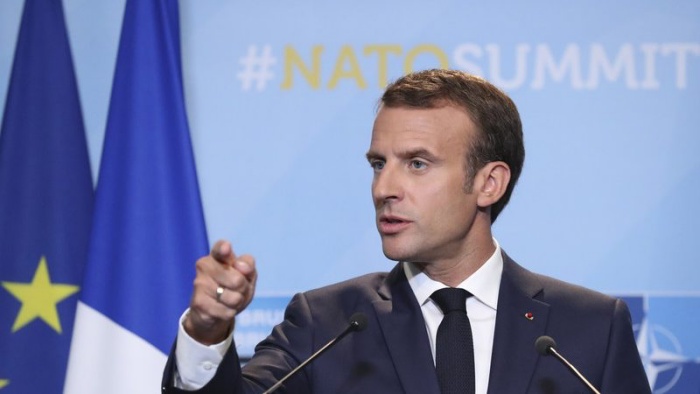 He was hoping to avoid Ankara vetoing their requests to join the trans-Atlantic defense pact.

Turkey warned Wednesday that the NATO accession process for Sweden and Finland would not move forward unless they addressed Ankara’s security concerns, a reference to their supposed sympathy toward Kurdish militant groups.

“The president underscored the need to respect the sovereign choice of these two countries, which emerged from a democratic process and in reaction to the changes in their security environment,” Macron’s office said after a telephone call with Erdoğan.

“He said he hoped the discussions would continue to find a solution quickly,” his office added.

But Turkey, a NATO member, is throwing a wrench in the works as any membership must be unanimously approved by all alliance members.

Ankara accuses Stockholm in particular of providing a haven for the outlawed Kurdistan Workers’ Party (PKK), listed as a terrorist group by Turkey and its Western allies.

Erdoğan is also weighing a new military operation in northern Syria aimed at crushing Syrian Kurdish fighters who assisted the US-led campaign against the Islamic State in Iraq and the Levant (ISIL).

Such an incursion risks creating new tensions between Ankara and other NATO members, with the US warning this week that its soldiers could be put in jeopardy.

During the call between Erdoğan and Macron, the two leaders agreed to continue efforts to restart Ukraine grain exports now that Russian forces control most of the country’s ports, in order to avoid food shortages that threaten several developing countries.

But the Kremlin denied Monday any blame for the halted grain deliveries and accused Western countries of preventing cargo vessels from leaving Ukrainian ports.