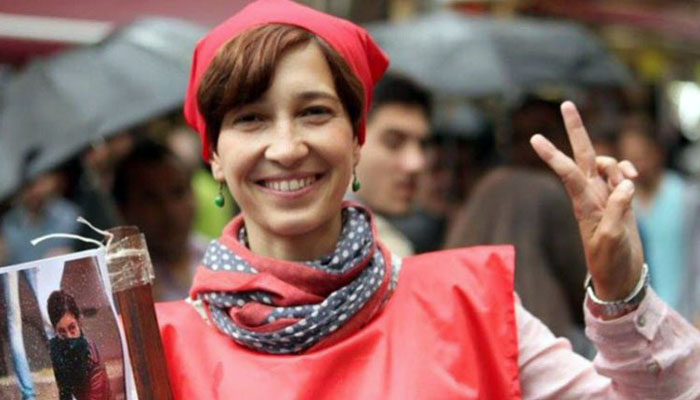 A Turkish court has handed down a prison sentence of 10 years to an academic who had been dismissed from her job in the aftermath of a coup attempt in Turkey in 2016, on charges of terrorist organization membership, the Gazete Duvar news website reported.

Academic and rights activist Nuriye Gülmen, who has been in İstanbul’s Silivri Prison since August 2020, was standing trial along with three others at the İstanbul 28th High Criminal Court. The last hearing was held on Wednesday.

Another defendant, Yasemin Karadağ, was also given a jail sentence of 10 years on the same charges. They are accused of membership in the Revolutionary People’s Liberation Party/Front (DHKP/C), a militant Marxist group listed as a terrorist organization by Turkey, the United States and the European Union.

The two remaining defendants were acquitted due to insufficient evidence.

In her final defense statement Gülmen said she was not only fired but also labelled as a terrorist for launching a protest demanding reinstatement to her job.

She also denied claims that she staged the protest based on orders from a terrorist organization.

“I had been in pre-trial detention for two years, and it has turned into a punishment,” she said.

Gülmen was an academic in the Turkish literature department of Selçuk University in Konya before she was summarily dismissed by a government decree in the aftermath of the failed coup on July 15, 2016. She was among more than 130,000 public servants who were fired from their jobs by emergency decree-laws for alleged membership in or relationships with “terrorist organizations.” She was detained and released in 2016 numerous times for protesting her firing along with dismissed teacher Semih Özakça on Ankara’s Yüksel Street, where they demanded reinstatement to their jobs in front of a human rights monument. The monument became a symbol of resistance and a demand for justice after other purge victims and activists joined them. Turkish police have notoriously used excessive force against the protestors on Yüksel Street.

Both Gülmen and Özakça, who began a hunger strike demanding their reinstatement, were arrested in May 2017 for alleged links to the DHKP/C.

Gülmen was released for health reasons in December 2017 on the 269th day of her hunger strike. She was then sentenced to six years, three months in prison but remained free pending appeal. Gülmen was re-arrested in August 2020 after she was detained in a police raid on the left-wing İdil Culture Center.