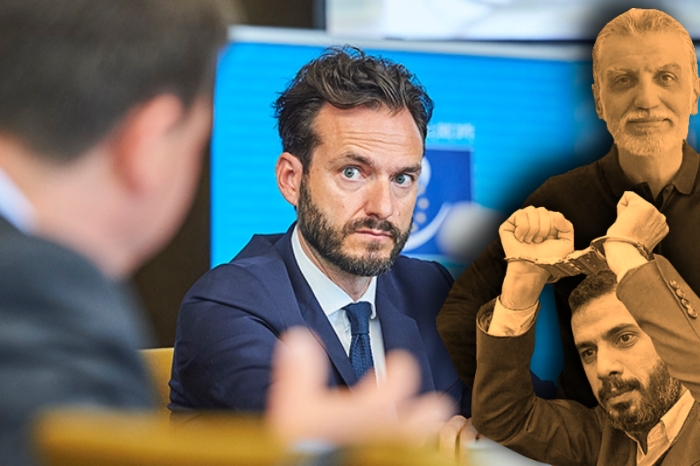 European Court of Human Rights (ECtHR) President Róbert Ragnar Spanó has given the court’s insufficient resources as the reason that the applications from two journalists in Turkey who have been behind bars for some seven years are still pending, the Tr724 news website reported.

Spano held a news conference on Tuesday to present the ECtHR’s activities and statistics for 2021. During the briefing, the ECtHR president was asked by a reporter from Tr724 about the applications of journalists Mehmet Baransu and Hidayet Karaca, which are still pending at the court, despite the fact that they have been in jail for seven years, and why their cases are designated category three, meaning not considered priority cases by the court.

In response, Spano, speaking in French, said: “It is difficult for me to make a statement for each and every case pending at the court. However, I can’t deny the fact that the court cannot examine applications in a reasonable period of time in some special cases.”

He also said the court was trying to change the situation as part of its new strategy but that it’s still difficult because there are only 47 judges at the court who work with limited resources.

“Yet I’m not denying this. The court has to act more quickly on the applications of journalists who are still in jail. But that’s the reality,” said Spano.

Karaca, former chief executive of the Samanyolu Media Group, has been held in the notorious Silivri Prison in İstanbul since Dec. 14, 2014 and was sentenced by an İstanbul court to 31 years, six months’ imprisonment over the scenario of a TV series that was broadcast by Samanyolu TV. Karaca was sentenced on charges of membership in a terrorist organization for his alleged ties to the Gülen movement, labelled as a terrorist organization by Turkey’s Justice and Development Party (AKP) government, and for allegedly slandering the al-Qaeda-affiliated radical Islamist group Tahşiyeciler.

Karaca applied to the ECtHR in 2015. His lawyer Nurullah Albayrak told the Bold Medya news website in 2020 that Turkey was pressuring the ECtHR not to conclude Karaca’s application and accused the court of engaging in discrimination against the journalist.

Former Taraf daily Mehmet Baransu, an outspoken critic of the AKP government, has been behind bars since March 2015. He has been handed down dozens of prison sentences and charged in numerous criminal cases in some of which he is facing life in prison.

Baransu filed an application at the ECtHR in 2016.

The ECtHR has over the years made rulings in the cases of some journalists who were unlawfully jailed in Turkey such as Murat Sabuncu, Mehmet Altan, Ahmet Altan and Nazlı Ilıcak and ordered Turkey to pay damages to these journalists while the applications of Karaca and Baransu are still pending.