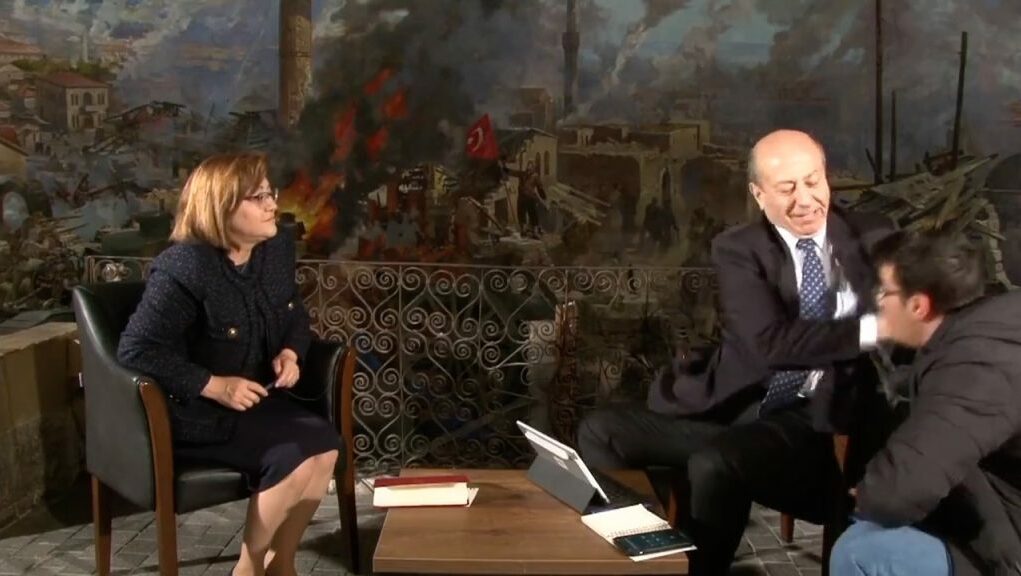 The Ankara representative of the Habertürk daily has sparked outrage among press organizations, journalists and rights activists for angrily swatting a cameraman away due to a technical problem during a live interview with a mayor.

The incident took place during an interview Habertürk’s Muharrem Sarıkaya was conducting with Fatma Şahin, mayor of the southeastern province of Gaziantep from the ruling Justice and Development Party (AKP), on Friday evening. It became public on Sunday when a video of the incident was leaked on social media.

In the video İhlas news agency cameraman Ahmet Demir is seen taking one of the phones on a table in an apparent attempt to fix a technical problem, but an angry Sarıkaya swats him away. In the meantime, Mayor Şahin continues to answer Sarıkaya’s question.

“We have been deeply shaken like everyone else by someone who defends human rights and the value of labor in his writings swatting a person in front of the camera. We reject every kind of violence and offer our best wishes to our cameraman friend who has been subjected to violence,” they said.

The Turkish Journalists’ Association (TGC) also released a statement condemning Sarıkaya’s behavior and recalling that journalism is teamwork and that no journalist should use violence against their colleague.

“Violence is both a crime and a violation of the ethics of journalism. His action has not only harmed our colleague Ahmet Demir but has damaged the solidarity among the journalists …” said the TGC.

The TGC also described Şahin’s silence after the incident as “thought-provoking.”

Social media users and journalists also criticized Şahin for her lack of response after witnessing the incident and continuing to speak as if nothing had happened.

In the meantime, Demir said he would file a criminal complaint against Sarıkaya on Tuesday and that he was deeply saddened not only by his action but also due to the lack of any reaction from the mayor.

“I was serving as a cameraman [during the interview]. Although it was not my job, I tried to deal with a problem and gave him [Sarıkaya] my phone, and he did this to me. I was saddened as I couldn’t do anything, and the person in front of him [Şahin] said nothing,” he said.

Demir also said Sarıkaya called him and apologized and invited him to Ankara to have a meal together. The cameraman said he turned his phone off.

Meanwhile, Sarıkaya released an apology on Monday on Twitter for his treatment of Demir, saying that the continuing technical problems in the sound system made him lose his temper. He said he has no excuse to defend his action. In a later statement, the journalist announced his resignation from Habertürk in the wake of the mounting reactions against him. It was not clear whether he will continue to write columns for the daily.

In addition to frequently facing legal action and violence for performing their jobs, journalists in Turkey, which has a poor record on press freedom, often complain about mobbing from their seniors in the workplace. These cases mostly go unnoticed and uninvestigated as some journalists fear losing their jobs if they speak up.