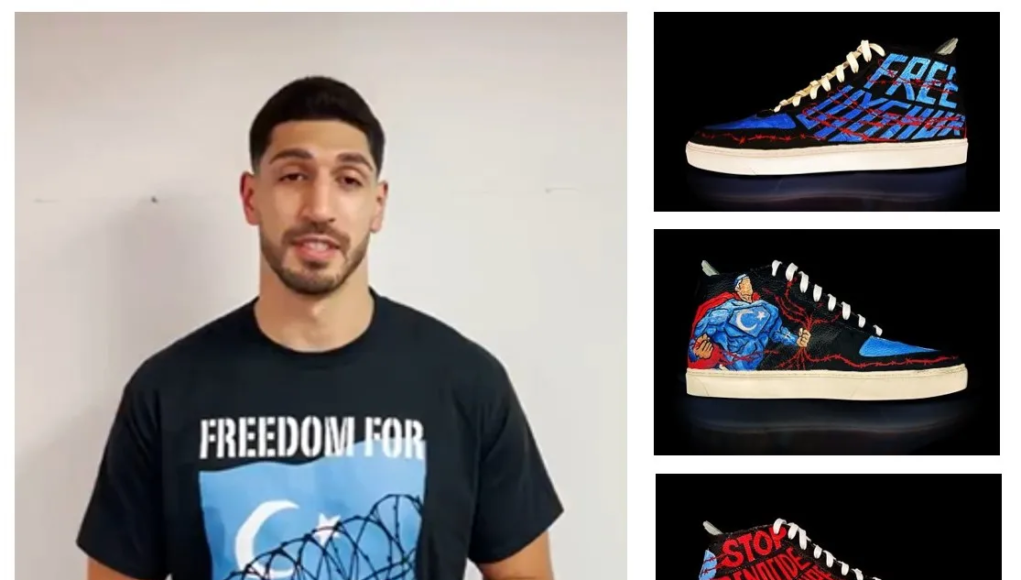 “I felt encouraged to speak out against China after NBA officials said they were giving their players the freedom to talk about injustices happening around the world,” Enes Kanter said in an interview with CNN’s Christiane Amanpour, the Stockholm Center for Freedom reported.

“[The] NBA made me do this,” the Boston Celtics star said. “Because every time when one of the NBA teams or the commissioner comes out to speak, they say we are encouraging players to talk about whatever they want to talk about.

“We are giving freedom to our players to talk about all the injustices happening around the world, all the human rights abuses around the world. So, they gave me this right.”

Heartless Dictator of China,
XI JINPING and the Communist Party of China.

I am calling you out in front of the whole world.
Close down the SLAVE labor camps and free the UYGHUR people!

His posts and comments have caused a backlash in China, with Celtics games being pulled by Chinese video-streaming site Tencent and the government criticizing the 29-year-old’s comments.

Kanter says he sat down privately with NBA officials and commissioner Adam Silver and that Silver backed his right to freedom of speech.

The Celtics center says he has no intention of breaking NBA rules but is concerned as to why the NBA has yet to release a public statement on the issue.

Turkey had revoked Kanter’s passport in 2017 and attempted to have him deported from Romania on May 20, 2017 during one of his international trips. His passport was briefly seized by the Romanian police upon a request from the Turkish government. The NBA said it had worked with the State Department to ensure Kanter’s release in Romania.

Erdoğan has been targeting followers of the movement since the corruption investigations of December 17-25, 2013, which implicated then-Prime Minister Erdoğan, his family members and his inner circle.

Dismissing the investigations as a Gülenist coup and conspiracy against his government, Erdoğan designated the movement as a terrorist organization and began to target its members. Erdoğan intensified the crackdown on the movement following a coup attempt on July 15, 2016 that he accused Gülen of masterminding. Gülen strongly denies involvement in the abortive putsch or any terrorist activity. Following the allegations, he called on the Turkish government to allow for an international investigation.