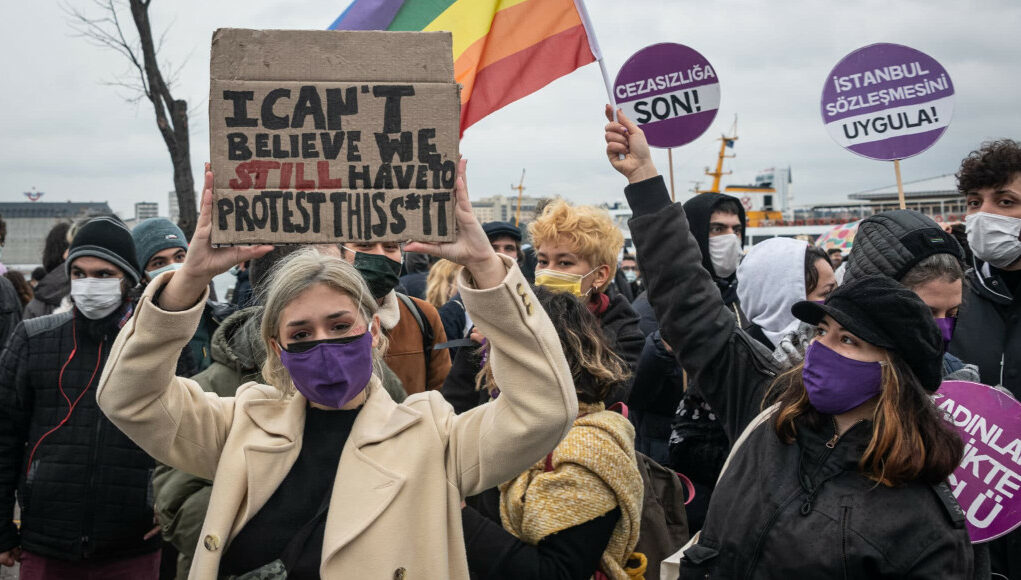 In a joint statement on President Recep Tayyip Erdoğan’s latest remarks regarding the Istanbul Convention, eight of Turkey’s bar associations have urged him to stop targeting the Council of Europe’s (CoE) binding treaty preventing and combating violence against women, the Stockholm Center for Freedom reported, citing the Bianet news website.

The bar associations on Wednesday called on President Erdoğan to stop making remarks “aiming to increase pressure on women who request legal assistance in accordance with the İstanbul Convention and casting shadow on judicial independence.”

“From now on, our women should react against whoever utters a sentence that starts with ‘the Istanbul Convention,’ first and foremost, and because those people abuse them for the sake of their deviant ideological agenda,” Erdoğan said on Monday after a cabinet meeting in Ankara.

Signatories to the statement were the women rights centers of bar associations from Diyarbakır, Batman, Bingöl, Van, Mardin, Muş, Şırnak and Urfa provinces.

The president’s remarks came soon after Kemal Kılıçdaroğlu, leader of the main opposition Republican People’s Party (CHP), on Nov. 7 promised in a video on Twitter to reinforce the Istanbul Convention within the first week after they take office, if they win the general election scheduled for 2023.

On March 20 Erdoğan pulled Turkey out of the CoE Convention on preventing and combating violence against women and domestic violence, also known as the Istanbul Convention, an international accord designed to protect women’s rights and prevent domestic violence in societies, despite high statistics of violence targeting women in the country and drawing condemnation from Turks and the international community.

The Turkish government’s move sparked outrage in the country and was met with criticism from several countries, international organizations and rights groups.

A survey conducted by pollster Metropoll revealed that 52.3 percent of Turks are against the withdrawal from the convention. While more than a majority of participants oppose it, 26.7 percent approve and 10.2 percent had no opinion.

Turkey’s right-wing opposition İYİ (Good) Party filed a submission with the Council of State requesting the cancellation of President Erdoğan’s executive decree in accordance with Articles 6, 87, 90 and 104 of the Turkish Constitution.

Femicides and violence against women are serious problems in Turkey, where women get killed, raped or beaten every day. Many critics say the main reason behind the situation is the policies of the AKP government, which protects violent and abusive men by granting them impunity.