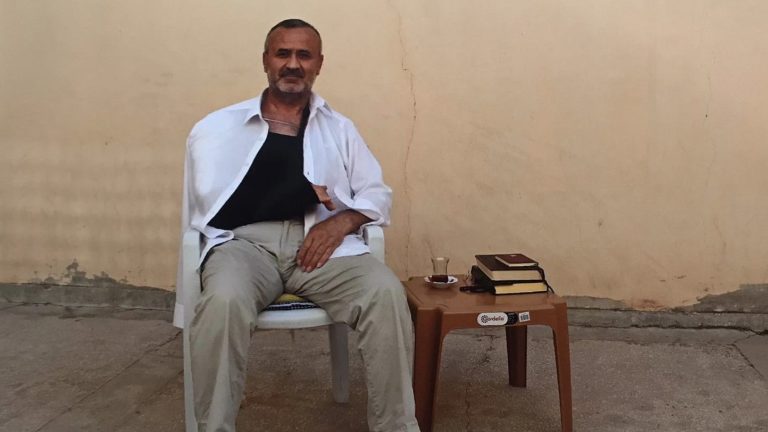 Photographs released by the administration of Turkey’s notorious Silivri Prison on Saturday revealed that Orhan İnandı, a Turkish-Kyrgyz educator rendered to Turkey from Kyrgyzstan, still cannot use his right arm months after the torture and inhuman treatment he suffered, the Stockholm Center for Freedom reported.

İnandı’s photographs sparked an outcry among human rights defenders. Exiled journalist Hasan Cücük said on Twitter that those who were responsible would be held accountable before the law one day.

In a tweet on August 6, İnandı’s wife Reyhan İnandı said her husband did not receive timely medical treatment and as a result, could not use his right arm. İnandı’s broken bones had healed incorrectly because he was not treated when necessary and surgery had become impossible, she said.

In his first court appearances, İnandı had said he had been tortured in detention and gave details about what had happened to him.

İnandı, who was the founder and director of the prestigious Sapat school network operating in Kyrgyzstan, went missing on May 31 and was feared to have been abducted by Turkey’s National Intelligence Organization (MİT) due to his alleged links to the Gülen movement, a faith-based group inspired by Muslim cleric Fethullah Gülen. He is the latest victim in a series of cases in which Turkey’s intelligence agency has been involved in unlawfully transferring people to Turkey from countries around the world.

Turkish President Recep Tayyip Erdoğan had acknowledged in a statement on July 5 that İnandı was actually abducted by MİT, lauding the Turkish spies’ efforts in the rendition.

Photos of İnandı in handcuffs with Turkish flags prompted allegations of torture due to İnandı’s visible weight loss and swollen right hand.

An Ankara court on July 12 ruled to arrest İnandı on charges of serving as an executive of a terrorist organization.

In his first public comments on İnandı’s disappearance on May 31, lawyer Halil İbrahim Yılmaz said his client told him that three men who spoke fluent Kyrgyz and were possibly officers of the Kyrgyz police, security services or another Kyrgyz state entity kidnapped him.

President Erdoğan has been targeting followers of the Gülen movement since the corruption investigations of December 17-25, 2013, which implicated then-Prime Minister Erdoğan, his family members and his inner circle.

According to Şebnem Korur Fincancı, a doctor of forensic medicine and head of the Human Rights Foundation of Turkey (TİHV), the photos of İnandı point to torture, either torture by hanging or direct blows to the arm.

Human Rights Watch earlier said in a statement that the abduction, forcible disappearance and extrajudicial transfer of İnandı to Turkey by Turkish and Kyrgyz authorities amounted to egregious violations of international and domestic law.

Since the coup attempt in July 2016 the Erdoğan government has employed extralegal methods to secure the return of its critics after its official extradition requests have been denied. The government’s campaign has mostly relied on renditions, in which the government and its intelligence agency MİT persuade the relevant states to hand over individuals without due process, using various methods. The victims have faced a number of human rights violations including arbitrary arrests, house raids, torture and ill-treatment during these operations. A detailed account of Erdoğan government’s transnational repression can be found in SCF’s latest report, “Turkey’s Transnational Repression: Abduction, Rendition and Forcible Return of Erdoğan Critics.”

In several of these cases the UN Working Group on Arbitrary Detention (WGAD) concluded that the arrest, detention and forced transfer to Turkey of Turkish nationals were arbitrary and in violation of international human rights norms and standards.