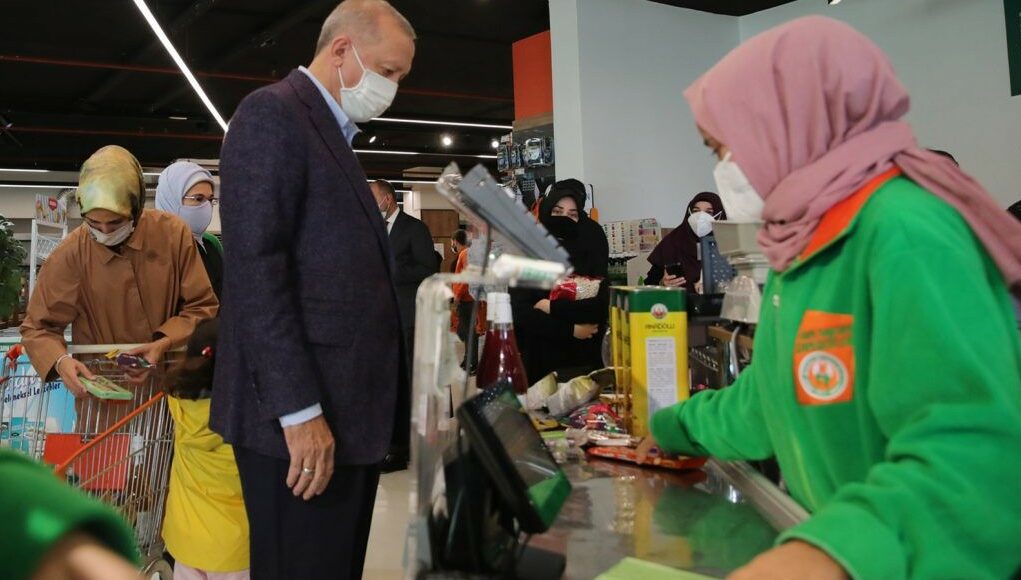 Amid declining support for his party in the face of double-digit inflation, Turkish President Recep Tayyip Erdoğan said on Sunday that agricultural cooperatives have been ordered to open some 1,000 new supermarkets across the country to provide “suitable” prices for consumer goods.

Visiting a grocery store run by the Agricultural Credit Cooperatives of Turkey in İstanbul on Sunday, Erdoğan said: “As you can see, the prices in this market are pretty fair. We’re going to increase the number of this kind of market.” He added that there are plans to open about 1,000 stores, with each one measuring 500 square meters in size.

“As a result, we’ll hopefully be able to deliver cheap and high quality products to our people and balance out the market,” he said.

Erdoğan’s remarks came in the wake of high inflation, which rose to 19.58 percent in September, its highest in two-and-a-half years according to official data revealed on Monday, and the continuing depreciation of the Turkish lira.

Erdoğan and his Justice and Development Party (AKP) government hold supermarkets responsible for the high prices for consumer goods, and investigations have been launched into some supermarket chains for allegedly exploitative pricing.

However, economists say not supermarket chains but poor economy management is the cause of the high inflation in Turkey and that opening new supermarkets will not cure the problem but will instead deepen it.

According to Professor Selva Demiralp from Koç University in İstanbul, an independent central bank is a must for the solution of high inflation.

“You can’t reduce inflation by opening discount markets. Sales from markets operating at a financial loss would not have a [positive] effect on the economy. Someone must pay for that loss. The important thing is to reduce the high prices permanently and prevent people’s purchasing power from shrinking against inflation,” Demiralp said in remarks to Turkish media outlets.

Erdoğan is frequently criticized for meddling in the work of the country’s central bank, which is supposed to be autonomous and independent. He has replaced several central bank governors in recent years due to disagreements about their financial policies.

In March, he fired Naci Ağbal, the third central bank governor in less than two years. The market-friendly Ağbal was replaced by Şahap Kavcıoğlu, a newspaper columnist who shares Erdoğan’s unconventional view that high interest rates drive, rather than quell, inflation.

Associate Professor Baki Demirel from Yalova University said in remarks to Turkish media that it is more important to increase people’s income than to open new supermarkets.

“It would be more beneficial for the country if the government increases wages and implements a monetary policy that will prevent the depreciation of the Turkish lira,” he said, adding that an independent central bank is of utmost importance to achieving these goals.

In early 2019 — on the heels of a currency crisis that sent inflation soaring — the government opened its own markets to sell cheap vegetables and fruits directly, cutting out retailers it accused at the time of jacking up prices.