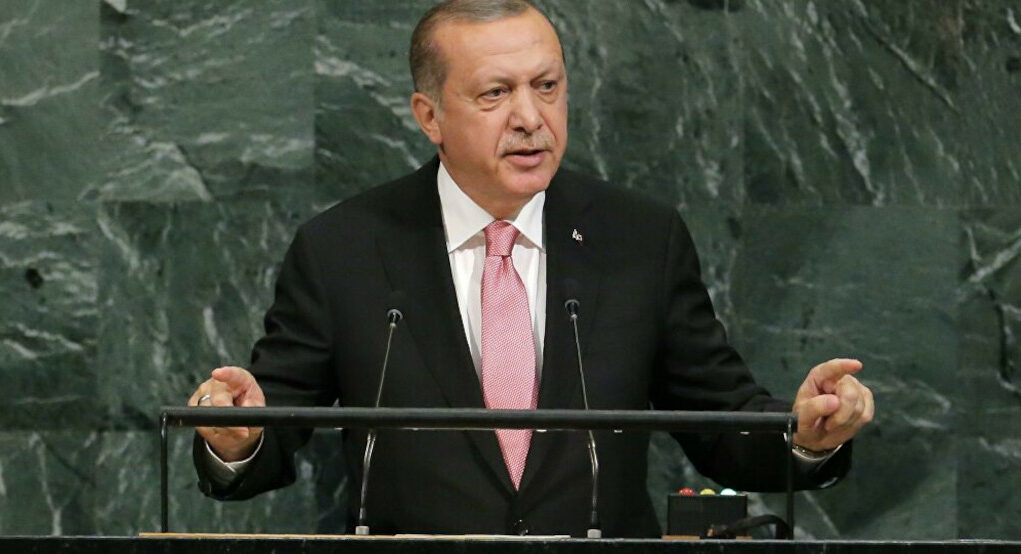 Several prominent world leaders have failed to make an appearance at this year’s UN General Assembly, which started on Tuesday. Due to rising tension with the US government, Chinese President Xi Jinping made a last-minute decision to send a pre-recorded video, while Russian President Vladimir Putin deployed his foreign minister, Sergey Lavrov, to New York. French President Emmanuel Macron neither made an appearance nor sent a video message, reportedly in a display of displeasure at the United States over Washington’s secret submarine deal with Australia. However, Turkish President Recep Tayyip Erdoğan along with 200 businesspeople landed in New York and addressed the General Assembly on the first day amid disagreements with US President Joe Biden’s administration.

His ill health and his country in the midst of economic turmoil notwithstanding, Erdoğan came well prepared to put on a show during his visit to New York. He began by introducing his newly released book, “Daha Adil Bir Dünya Mümkün” (A Fairer World Is Possible), at a press conference at Istanbul Airport before flying to New York. He then cut the ribbon on the Seljuk Empire-architecturally styled Turkish House (also called Türkevi Center), a high-tech, 35-story high rise directly across from the United Nations that will serve as the headquarters of Turkey’s permanent mission to the UN and its consulate general in New York.

Turkey’s Communications Director Fahrettin Altun confirmed that Erdoğan’s new book, published by the pro-Erdoğan Turkuvaz Media Holding’s Turkuaz Kitap, “offers a concrete proposal for the restructuring of the United Nations by touching on burning issues such as global political dilemmas, global injustice, the refugee crisis, international terrorism and Islamophobia.” Erdoğan, who is known for his populist rhetoric in speeches, began his presentation at the General Assembly by mentioning that the current session was being held on the 100th anniversary of World War I, the effects of which continue to deprive people of stability, peace and prosperity a century later. He went on to lament the fact that countries such as Iraq, Syria, Libya, Afghanistan and Ukraine face ongoing challenges related to hunger, malnutrition, communicable disease and a lack of education. Erdoğan criticized the United Nations over its inability to find effective solutions to conflicts in places like Palestine and Syria, where women remain vulnerable. Erdoğan also raised the issue of Kashmir in his address to the General Assembly, angering India. He also criticized the UN for legitimizing Abdel Fattah Al-Sisi’s 2013 coup in Egypt. He did not miss the opportunity to mention that Turkey would ratify the Paris Climate Accords in time for the 26th UN Climate Change Conference of the Parties (COP26), which will be hosted by the UK in Glasgow from Oct. 31 to Nov. 12, 2021. He mentioned that Turkey was among the first countries to have signed the Paris climate agreement but had yet to ratify it due to the injustices related to stated obligations and burden-sharing.

As always the Turkish president was strategic, making sure to benefit from the opportunity, and hosted UN Secretary-General António Guterres at Türkevi, expressing a commitment to combating climate change and appearing at the assembly as the voice of oppressed nations. However, herein lies the irony: Erdoğan portraying himself as the voice of the voiceless and speaking out loudly against the massacre of women and children in Gaza and Syria while a gathering in Geneva reveals gruesome truths about Erdoğan’s Turkey. Lawyers, teachers and journalists have spoken out at the Turkey Tribunal, revealing dark truths of torture by the Turkish government.

Erdoğan has accused Muslim cleric Fethullah Gülen of being behind a coup attempt in July 2016. Following the abortive putsch, the Turkish government formally declared the Gülen movement a terrorist organization and arrested tens of thousands of state officials including judges, civil servants, academics, and teachers. The symbolic international tribunal exposes human rights violations in Turkey as part of Erdoğan’s post-coup purge. The tribunal convened on Sept. 21 and will continue until Friday, Sept. 24. The Turkey Tribunal is symbolic, but its report will be submitted to the International Criminal Court in The Hague.

Erhan Doğan’s testimony was one of the more gut-wrenching, causing an outcry among many. Doğan, who was a history teacher, was brutally tortured in a gym run by the Ankara Police Department just after the July 15, 2016 coup attempt for being a member of the Gülen movement. He revealed to the tribunal that while at the torture center, they threatened his wife and daughter with rape and that he heard the desperate cries of three women pleading in vain to not be raped.

Teacher Mehmet Alp was abducted by Turkish intelligence agency MIT in the southeastern Kurdish-majority town of Cizre on April 18, 2015. He was tried and convicted in Turkey but fled to Europe after being released on appeal in 2018. He told the tribunal he was forced to sign a pre-written statement accusing him of encouraging his students to join the outlawed Kurdistan Workers’ Party (PKK) due to threats to his wife and children and was tortured for days at a time.

Lawyer and human rights activist Eren Keskin, co-chair of the Turkish Human Rights Association (İHD) and co-founder of the Legal Aid Bureau against Sexual Harassment and Rape in Custody, revealed in heartbreaking and gruesome detail the abuse endured by women in Turkish prisons.

While the Turkish leader occupies himself with authoring books speaking of a better world and travelling around the globe to advocate for justice, peace and equality, his state apparatus continues to commit brutal human right violations in Guantanamo-type detention centers across Turkey.